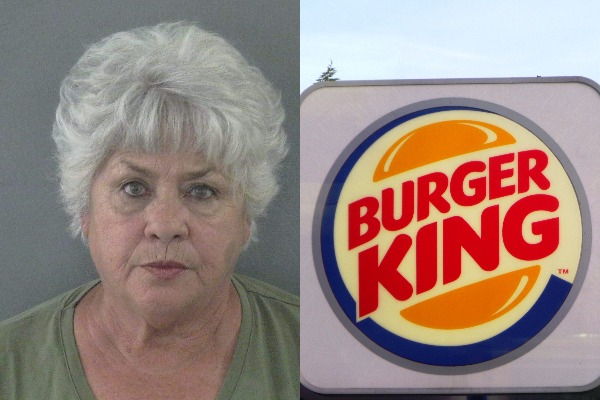 Now, this isn’t what Burger King meant when they said “Have It Your Way.” An elderly woman in Florida has been arrested and charged after she went on a racist tirade and threw a Whopper at a Burger King employee.

Judith Black, 77, made headlines over the week after she attacked a Black Burger King employee due to her frustration over how thick the tomato was, Village News reports. The Village of Pine Ridge resident was arrested on Friday, April 30 after she approached a Burger King staffer and started “yelling” over her burger’s juicy tomato, a statement from the Wildwood Police Department said.

The worker tried to get Black to calm down and told her she couldn’t help her unless she calmed down. But when she turned around, Black threw the Whopper sandwich at her back, Insider reports.

“Shut up you Black bitch,” Black shouted at the employee. The police report says she continued to use the N-word before storming out of the fast-food chain. The store’s manager, another worker, and a customer all shared the same account with the police.

After another employee captured the license plate of the white Dodge Ram Black drove off in, cops were able to track her down and take her into custody, NY Post reports. She told cops that she was “angry” that the employee was not “fixing the issue,” the police report said. She also admitted that she “had the burger in my hand and tossed it at her” and it hit the worker in the back.

“Ms. Black also stated that she called the victim a ‘stupid black b***h,’” the report said.

Due to the racial epithets used in Black’s attack, “this enhances the charge of battery from a misdemeanor of the first degree to a felony of the third degree under Florida State Statute 775.085,” the arrest report said.

The racist elderly Burger King criminal was booked at the Sumter County Detention Center and released after posting a $2,500 bond.