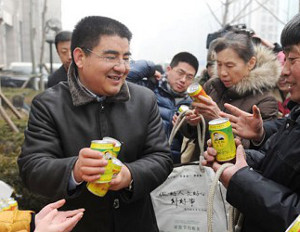 To draw attention to the growing problem of air pollution in China, an entrepreneur and environmentalist is selling cans of fresh air to citizens in Beijing.

Chen Guangbiao is selling each can of fresh air for 5 yuan, which is about 80 cents in US currency. Chen isn’t making a profit off the cans of air and has no need to, his estimated net worth is $740 million. He’s using the cans to highlight the dangerous conditions of air pollution in the country.

The pollution in China’s cities is so bad, residents are wearing gas masks in order to breathe. The U.S. Embassy in Beijing issued the following air quality alert last week: “Everyone should avoid all physical activity outdoors; people with heart or lung disease, older adults and children should remain indoors and keep activity levels low.”

Pollution levels have gotten so bad that flights out of the Beijing Capital Airport have been cancelled because of smog.

The air is collected and compressed from “revolutionary regions” from Jinggang Mountain in Jiangxi Province to some ethnic minority areas and Taiwan, according to China’s Global Times. There are different air varieties available including: pristine Tibet, post-industrial Taiwan, and Yan’an (early era of Communism). On Friday, Want China Times reported that Chen has sold “more than 8 million cans” of the fresh air.

In addition to selling millions of cans (the proceeds of which will go to charity), Chen has reportedly been taking to the streets to give away cans of fresh air for free.