Entrepreneurâ€™s Conference, Day 3: Three Tips To Get On The Shelf, Hosted by Walmart 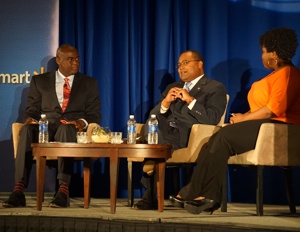 All three panelists shared their stories about Walmart, and the difficulty and reward from being on the national retailer's shelves.

It’s the third and final day of the Black Enterprise Entrepreneur’s Conference, sponsored by Nationwide, in Columbus, Ohio, and serial entrepreneurs, and business owners from Columbus as well as around the world are taking advice and gaining experience from those who’ve succeeded in creating monumentally successful businesses.

The Get On The Shelf panel, hosted by Walmart, dealt with getting your product on the shelves of one of the nation’s
largest retailers.

The talk was graced by Stephen Gilchrist, President of GSL Distributors, Jonathan Nimrod of Supplier Diversity Services for Walmart, and Arsha Jones, owner of Capital City LLC and Capital City Mumbo Sauce, who all gave their own ideas and personal histories about dealing with Walmart and getting on store shelves. They also answered questions from various business owners and entrepreneurs.

Don’t be intimidated:
Stephen Gilchrist was inexperienced with distributing foods after buying a distribution company from a friend, and even more inexperienced when dealing with a national brand like Walmart. “Walmart gives you three strikes in your lifetime, then you’re out,â€ Gilchrist said, who sells pork skin snacks in Walmart stores across the country. “In the first week, we had two strikes.â€ He was determined to stay in stores, so he followed all of Walmart’s rules and suggestions to the letter. “We didn’t let the process intimidate us from doing business with the world’s largest retailer. Don’t allow anyone’s process to intimidate your efforts.â€

Be efficient:
Both Jonathan Nimrod and Arsha Jones know about efficiency. In order to keep prices down in stores, Jonathan had to find ways to cut costs without cutting corners. “People define success with ‘more’, but we need to see how do I do more with the same,â€ said Nimrod. “Where can you find efficiencies in what you do.â€

Jones used her “lean startupâ€ mentality to save on costs while starting from square one. “Don’t be afraid to start small,â€ she said, referring to Capital City Mumbo Sauce’s humble beginnings from her home to Walmart shelves. She bottled sauce in her home after work and on weekends, and bulk ordered ingredients from places like Costco. “We started with one product on one site with one PayPal link.â€

Be focused, and have a plan:
Gilchrist, who distributes Wallace’s Pork Skins for Walmart nationally, said a plan kept him from getting kicked out of Walmart forever. He acknowledged that getting on the shelf was hard, but what was even harder was staying there. That’s where planning comes in. “Part of planning allows you to get it on the shelf, but you then have to keep it on the shelf. Nimrod had an even more tangible analogy concerning focus. “I go road biking and mountain biking. When I’m mountain biking, where I keep my eyes is where I go,â€ said Nimrod. “If I take my eyes off the road for a second I’ll go into a ravine, I’ll hit a rock, one time I hit a tree. Before I get on, I already plan what I’ll do in a situation. I have a plan every time I hit a trail.”