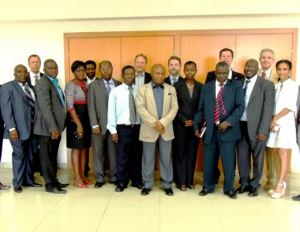 The government of Equatorial Guinea has established a new loan-guarantee program forÂ small and medium-sized businesses (SMEs) as a means of encouraging entrepreneurs and stimulating the creation of new businesses in the country.

TheÂ Republic of Equatorial Guinea (Republica de Guinea Ecuatorial) is the only Spanish-speaking country inÂ Africa, and one of the smallest nations on the continent. In the late-1990s, American companies helped discover the country’s oil and natural gas resources, which only within the last five years began contributing to the global energy supply.Â Equatorial Guinea is now working to serve as a pillar of stability and security in its region of West Central Africa.

Under the program, known as the Pilot Partial Guarantee Fund for the Creation of Small and Medium Enterprises, the Government, the Ministry of the Economy will guarantee payment to theÂ National Bank of Equatorial Guinea (BANGE) of loans to small and medium-sized entrepreneurs that are in default. BANGE is a private commercial bank.

The ministry will cover up to 40% of a loan made by BANGE to small and medium-sized enterprises, should the loan be in default. To do this, SMEs must meet a series of requirements when applying for a loan with BANGE, such as presenting a business plan or operating profit, among others.

The government announced the program at a ceremony onÂ May 3, when Minister of the EconomyÂ Celestino Bonifacio Bakale ObiangÂ and the director of the National Bank ofÂ Equatorial GuineaÂ signed the official agreement.

The main objective of this initiative, according to Minister Bakale, is to “create jobs and create a competitive business environment.”

During the ceremony, the Director of the National Institute for Enterprise Development and Promotion (INPYDE), Ricardo Maximum Torao Oyo, said that “the government is aware of the difficulties many small businesses face to obtain credit from banks, and the risks that they must assume the same, and it has made available all this fund, which provides a guarantee that money given to small businesses will be recovered in the event of insolvency.”

Minister of FinanceÂ Marcelino Owono EduÂ noted that the initiative comes from the desire ofÂ President Obiang Nguema Mbasogo to improve the country’s business environment, a critical step in the overall development of the nation.

“Our current economic situation gives us an opportunity to do more things, and business development is the backbone in the goal we have set,” said the minister. “This fund cannot be considered a mechanism to subsidize companies but as a means of sharing the financing risk between the public and the commercial banks.”