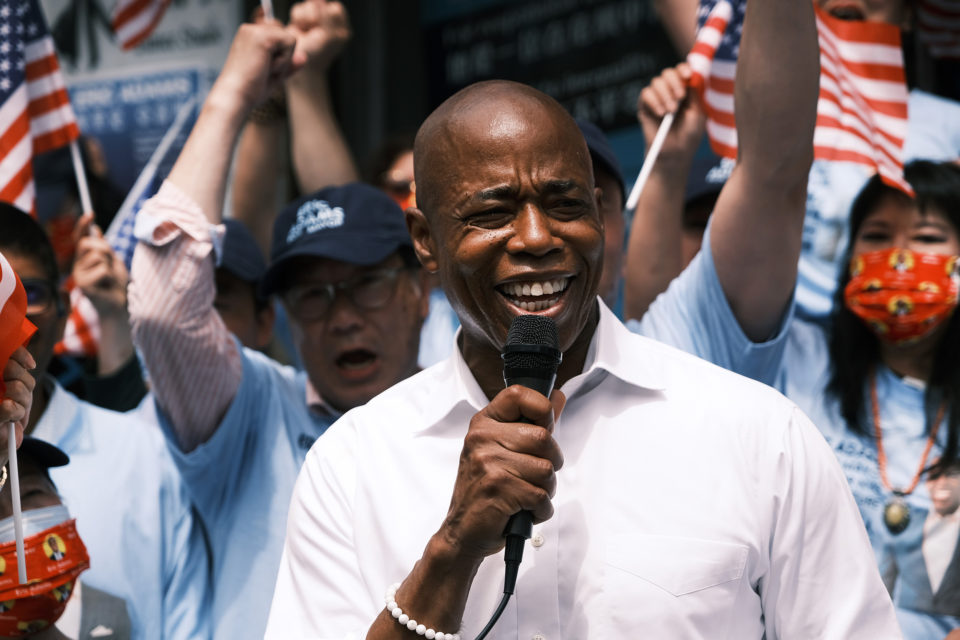 Adams leads with 31.7% of the vote. In second is former Civil Rights attorney Maya Wiley (22%) and former Sanitation Commissioner Kathryn Garcia (20%) is in third. However, due to ranked choice voting and absentee ballots that haven’t been counted yet, it could take until mid-July to find out who the winner is.

The New York Board of Elections will release the first tabulation of ranked-choice votes for the early in-person and primary day votes on June 29. The first count of absentee ballots is expected to take place July 6. Voters who sent in absentee ballots have until July 9 to change any deficiencies, meaning the final results may not come until July 12.

Despite his lead, Adams urged patience Tuesday night at his campaign headquarters.

“We know that this is going to be layers. This is the first early voting count. We know that. We know there’s going to be twos and threes and fours, we know that,” Adams said. “But there’s something else we know: that New York City said ‘our first choice is Eric Adams.'”

Entrepreneur Andrew Yang, who is in fourth behind Wiley and Garcia conceded the race Tuesday night. Yang was a frontrunner for most of the race, but between his political inexperience and his inability to recognize New York City trends, he fell out of favor in the last weeks of the race.

“You all know I am a numbers guy. I’m someone who trafficks in what’s happening by the numbers and I’m not going to be the next mayor of New York City,” Yang said Tuesday night. “I am conceding this race. Though we’re not sure ultimately who the next mayor is going to be, but whoever that person is, I will be very happy to work with them to help improve the lives of the 8.3 million people who live in our great city.”

In many ranked-choice races in the past, the frontrunner typically wins, but there have been races where a candidate leading by a wide margin early, barely hung on by the end of the count. In 2018, San Francisco Mayor London Breed who was winning by about 12 points after the first tally of votes, ended up winning by just one point when all votes were counted.

The winner of the Democratic primary will take on Republican Curtis Sliwa, who won the Republican primary Tuesday, in November.