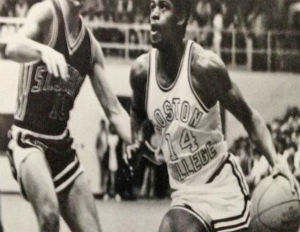 The following is a feature by The Shadow League’s Alejandro Daniels:

Thursday, March 22, 1984. At 11:05 a.m., United States District Judge Leonard Wexler completed his instructions to the jury in the Federal Court Building in Brooklyn as Ernie Cobb awaited his judgment.

The thoughts continuously raced through Cobb’s mind: how had he arrived here, he wondered, of all places, charged with allegedly conspiring to commit sports bribery while allegedly fixing college basketball games for the Mob?

Cobb had been a prolific shooting guard at Boston College in the late 1970’s, a team captain who’d etched his name into the school’s record books as its third-leading career scorer. He’d averaged 21.3 points per game during the 1978-1979 season, leading the Eagles to a 21-8 record.

He ate, drank, and slept basketball. The game had saved his life, delivered him from peril, from a path leading nowhere, from dysfunction and illiteracy, to an elite college education and a shot at the NBA and a better future.

Couldn’t people see how much he loved the game? How much he was indebted to it? How much his positive life trajectory was propelled by it? Couldn’t they see how grateful he was, that he’d never cheat the thing that gave his life such meaning and purpose?