Every Student Succeeds When Schools Are Funded Fairly 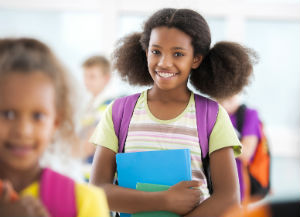 Maya tries to concentrate on her lesson in a sweltering, overcrowded Title I classroom, with no air conditioning. Maya’s sixth grade teacher–just out of college–attempts to engage her classroom of 30 students with material from 20-year-old textbooks. Maya feels like she is falling behind–and she is.

Just down the street at a more well-to-do school in the same district, Myriam sits in a bright, air-conditioned sixth grade classroom with her 12 classmates–a computer in front of each of them. Gently guided by her veteran teacher and a teaching assistant, Myriam whizzes through the computer program and is hungry for the next lesson.

While Maya and Myriam are fictional, the tale of two Americas is not. Separate and unequal persists in our schools today.

The unfortunate truth is that 62 years after the U.S. Supreme Court ruled that segregated schools are unconstitutional, our schools are more segregated today than they were in 1968. Over half of the nation’s pre-K-12 students live in poverty, and 70% of the nation’s African American and Hispanic students attend a Title I school located in concentrated poverty. Yet, Title I schools receive less funding than schools in wealthier areas. Moreover, the National Urban League’s 2016 State of Black America Equality Index showed a 23 percentage point equality gap between blacks and whites in education, revealing the need to create equal access to educational opportunities for vulnerable students.

In a nation as prosperous as ours, schools and districts should have the resources they need to provide an excellent education to all of our children. That’s why in 1965, Congress passed the original Elementary and Secondary Education Act to provide additional federal dollars to low-income students and schools, so that students like Maya could receive a high quality education and, subsequently, an equal shot at the American Dream. This idea stems from a provision called “supplement not supplant,â€ which says that districts must use federal dollars to give additional support and services. In other words, districts may not disinvest in their schools and then use federal funds as a replacement. The meaning of this provision remains the same in the recently reauthorized Every Student Succeeds Act, or ESSA.

Funding inequities are rampant across our nation. According to a recent report from The Education Trust, the “highest poverty districts in our country receive about $1,200 less per student than the lowest poverty districts. The differences are even larger–roughly $2,000 per student–between districts serving the most students of color and those serving the fewest.â€ Those inequities are then compoundedÂ withinÂ districts, so schools like Maya’s, which serve more students from low-income families,Â receive less funding than schools like Myriam’s, where students come from wealthier backgrounds.Â AÂ 2011 studyÂ from the U.S. Department of Education showed that almost half of Title I schools received less money than non-Title I schoolsÂ in the same district. This denies children an equal educational opportunity and undermines the purpose of these federal dollars.

As an organization, the National Urban League has more than 100 years of experience providing direct services to underserved and vulnerable communities, and we know that this type of funding scheme will never give every student the opportunity to succeed. States and school districts must be held accountable. As a member of the congressionally chartered Equity and Excellence Commission, we recommended bold action to fix this problem and ensure resource equity in our schools.

It’s simple. Districts should fund their schools fairly, and in return, the federal government will provide additional resources to the schools serving low-income and vulnerable students. Federal dollars, as provided from the taxes of the hard-working people of this nation, should go to schools that need extra help.

We look forward to working with the Department of Education, states, and school districts to end these disparities and move our nation toward fairer funding so that the promise of this civil rights law is met and every student succeeds.

This editorial was written by National Urban League President Marc Morial and was originally publishedÂ on The Hill website.