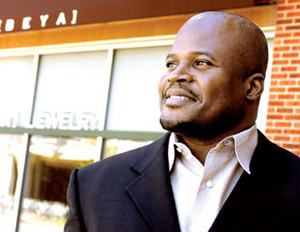 It was a career ending injury in 2001 that took away his lifelong passion and primary revenue stream overnight forÂ Tim Biakabatuka. That career impermanence drove him toward the idea of business ownership. After being involved in various business ventures, it was the stability and consistency of the franchise model that best suited his aspirations.

The 40-year-old former running back for the University of Michigan and Carolina Panthers entered the Bojangles’ franchise system in 2008 when he purchased and renovated a Walton Way restaurant. This summer he opened up his fourth Bojangles location in Northwest Georgia, with plans to add two more within the next two years.

Biakabatuka first joined the annual Professional Athlete Franchise Initiative (PAFI) Summit when he was just the owner of two Bojangles restaurants in Augusta. His initial interest in involvement with PAFI was more about inspiring young athletes to look at franchising. However, his engagement ended up providing him an opportunity to network with other like minded individuals and learn more about his craft.

During a recent interview with PAFI founder Michael Stone, Biakabatuka discussed what has helped him most during this growth period, including how helpful Bojangles corporate support had been. “They provided the approved architect and contractor for the first three locations and sent in an All-Star team to assist in the store opening process and the first two weeks of operations. For the fourth store you lose your All Star team but by then you have begun to develop a team of your own and they provide other supportâ€ he explained.

Stone points out that as you take a closer look at Biakabatuka’s operations and listen to his words, you start to understand the value of his new team. “We are just getting the construction, development and launch process down to a science,â€ Biakabatuka stated, adding the he invested early in an area supervisor. Â Typically you bring this position in after getting to the five to six store mark. “When I first started I was much more involved in the day to day operations. Now most of my work is administrative and site search.â€