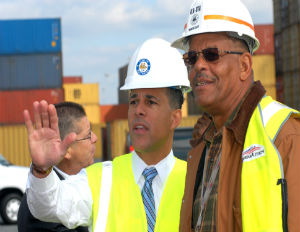 On Nov. 4, the great state of Maryland makes a big decision. Voters will choose the next man to lead their state through the next four years.

They’ve got two choices. On the one hand they’ll have the Republican, Larry Hogan, a real estate broker from Anne Arundel County and on the other, the Democrat, Anthony G. Brown, the lieutenant governor.

If Brown is chosen, he becomes the State’s first ever African American governor and only the third elected black governor in United States history.

Brown is well aware that he is flirting with history. He tells Black Enterprise magazine, “Clearly, I am very mindful of the historic significance of my candidacy and what this election means in terms of the history of this country and the opportunity and ability of African Americans to rise to the highest offices in the land. I respect the enormousness of the challenge. It is the result of generations of African Americans who’ve suffered, struggled, and sacrificed to make this possible.”

The lieutenant governor Â is so close he can almost reach out and touch the governor’s chair. He won the primaries fairly easily, and although several political pundits think Brown has this thing in the bag, he disagrees, acknowledging the work ahead.

“We are really excited coming off of a fairly decisive primary election in victory. It gives a lot of momentum going into the general election, but if you look at the history of the last 20 years in Maryland, the gubernatorial races have historically been tighter, so this will be a close race. We’ll win. We’ve got the message, we’ve got the resources, we’ve got the right ideas for Maryland, but it’s not a cakewalk.”

It’s been a dozen years since a Republican won a Maryland governor’s race and even before that victory a state Republican hadn’t sat in the governor’s chair for some time. Independent polls taken at the beginning of September suggest that Brown has a sizable lead.

The question is, can he fill the enormous shoes left behind by outgoing governor Martin O’Malley, who, it appears, is signing up to enter the 2016 presidential democratic primary. If Brown hopes to be Maryland’s next governor, he’ll have to woo the black vote, and one way to do that will be to appeal to minority entrepreneurs.

Brown believes he’s already making progress. “The good news is that it is a good news story in Maryland. We’ve made tremendous progress in terms of our Minority Business Enterprise program in Maryland in the last eight years, and I’ve had a leadership role in the current administration. We’ve increased payments to MBE firms by almost 140%, Â and this is in a time when we are weathering the recession and in a protracted recovery. We didn’t use that as an excuse but saw it as a real opportunity to expand. We went from about $750 million a year to about $1.8 billion, and we know we can still do better”.

Chairmen of the Board: 10 Most Powerful African Americans Directing U.S. Corporations

The Progress Cha Cha: How Achievements—and Setbacks—Lead to Business Success

FacebookTwitterYoutube
← Chairmen of the Board: 10 Most Powerful African Americans Directing U.S. Corporations ← The Progress Cha Cha: How Achievements—and Setbacks—Lead to Business Success
×
'