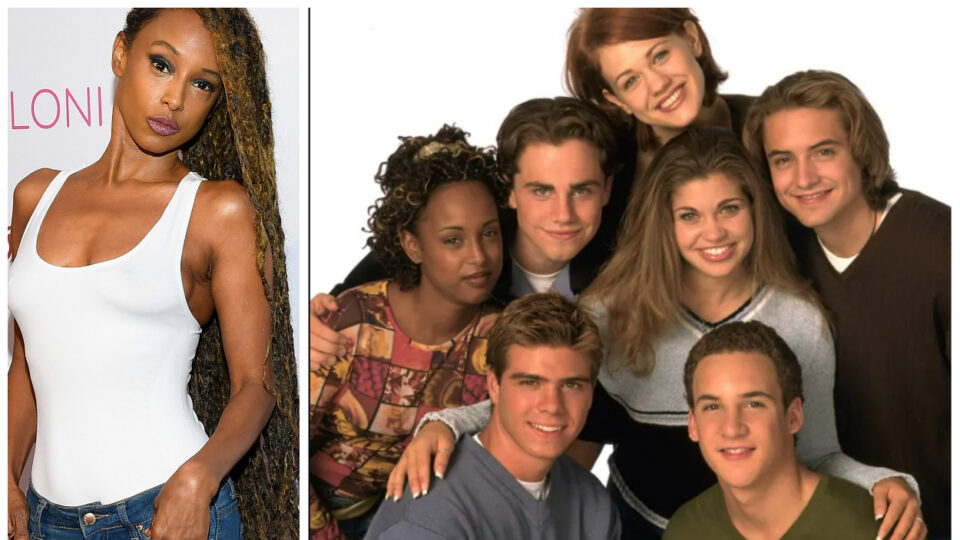 Actress Trina McGee has been opening up about her experience being the only Black cast member on the popular sitcom Boy Meets World.

The show ran for seven seasons from 1993 and 2000 and McGee, who starred in the series from 1997 to 2000, served as the only diverse representation among the cast. Recently, McGee revealed a past experience she had with Boy Meets World showrunner Michael Jacobs where she was told to “turn down the Telma Hopkins about eight notches.”

For those unfamiliar with Telma, here are the cliff notes: back in the day she was the quintessential Black actress with range as a singer (one-third of the group Tony Orlando and Dawn) and an accomplished actress. She was the standard when it comes to seeing Black women on TV, yet in this instance the Boy Meets World showrunner likely saw her as a stereotypical Black woman.

While recalling the incident on the Pod Meets World podcast on Monday, McGee said she “knew exactly what he (the showrunner) was talking about” and did what she was asked, which was to be less Black. But reminded her costars of how “lucky” they were that they didn’t have to think about things like that.

“Sometimes, it was too much,” McGee said.

In an exclusive interview with BLACK ENTERPRISE, McGee cleared the air on the “racist comment” she experienced and explained why she doesn’t want to tie the term “racism” to her story.

How do you feel about the level of representation Black women in television are receiving now as compared to when you were getting started?

“I believe the level of representation has increased in volume. There are more of us on screen for sure, but let’s truly comprehend what we are representing. Without ownership completely of our own projects we are now just representing in volume another culture’s vision of us and pushing an agenda other than what’s best for us at times, mostly because we are not funding projects. I’m glad there are more of us out there but to what avail if we are not understanding the influence of our presence in influencing the world, the world’s vision of us, and our subsequent behavior impacted by our influenced vision of ourselves.”

You were 10 years older than your “Boy Meets World” co-stars and the only Black cast member. In what ways did you feel connected or disconnected from the cast?

“I had always played ten years younger before I was on “Boy Meets World”. Before arriving on the show I was well versed in playing a teenager on Black sitcoms like “Family Matters” and “The Parenthood”. I knew how to handle everybody being older than me by way of my acting mates, my go to tactic was to “say less act more”.

“Which I implemented on Boy Meets World until Will Friedle busted and outed me in a series of questions in fun while hanging out before a scene rehearsal. Once everyone knew, I was ten years older… it was what it was. Of course, there was a little disconnect when I went home to change diapers and give baths to my children and they went home to be teenagers. But we did connect in laughter, a lot of onset joking, (some hits, some misses in the joke department), but our highest level of connecting is in the natural way we work together.”

“As far as being the only Black, well I was well groomed by my grandmother on how to work in the white workforce.”

“I watched her handle that my whole life and it was a case of “say less, BE EXCELLENT”. I didn’t care about being the only Black person. But, I did care about being respected and delivering good work.”

How did you feel after finally breaking your silence about the racism you experienced on the Boy Meets World set?

“When news outlets say I experienced racism on the set, it gives a broad ongoing tormented vision. I experienced a racial comment that was handled… When I tweeted other disrespectful incidents, I was happy to have it off my chest and was prompted to do so when I saw the people involved making money in the afterlife of the show and not including me in the monies being dispersed. It felt great to be free of it. I knew I had brought a new audience and helped prolong the length of the run of the show and wanted in on the rewards of that work.

You recently revealed that the Boy Meets World showrunner told you to “turn down” your Blackness on the show. Did comments like this affect how you viewed yourself?

First off, what he said was to “turn down Telma Hopkins”. The media chose “Blackness” as their bait bite. I’ve been navigating the the meter of stereotypical “sassy black girl” for a long time before the show, in the business. I know what kind of human being I am, but nobody Black in America has grown up without the filters of how we are perceived in the world.

Do you feel the “Boy Meets World” cast and crew fully owned their treatment of you?

“Will and Danielle have surely owned up to their behavior.”

What advice do you have for combating racism in Hollywood?

“Make your own shows with private funding and get them out there asap and everywhere you can.
Right now Hollywood is celebrating Blackness and Black women as seen at the Emmys. Do you feel let down by Hollywood as a Black actress? If so in what way?

I’m ecstatic about the celebration. I knew what I was getting into when I went to Hollywood from NYC. I knew there was scarcity in roles. I have Great Faith and my path, if viewed in any way as a letdown, is an offense to my Creator. Hollywood is just a stop in an amazing journey, and life has never let me down in the grand scheme. I do see they have more Black hairdressers and that’s cool. I would have liked that.

“I’m filming a new movie this month, a sister will be doing my hair, that’s some cool progress for sure. But ownership is the final cog of true change.”