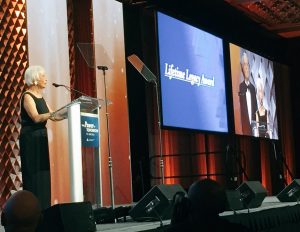 More than 2,000 of business and political luminaries recently gathered at Washington, D.C.’s Marriott Marquis to celebrate a milestone: the 30thÂ anniversary of the Executive Leadership Council, the leading organization of black global corporate leadership.

Under the theme, “The Power of Tomorrow,â€ ELC President and CEO Ronald C. Parker paid homage to the past, while laying a foundation for the future of African Americans in C-Suite and senior management positions.

“Thirty years ago, 19 black corporate executives came together to find common ground, mutual support, and ways to positively impact their communities and careers,â€ he said, citing the initial thrusts to help financially challenged historically black colleges and universities to create programs to diversify the corporate leadership pipeline. “In addition to celebrating our history, we are also focused on expanding our reach, to engage black leaders globally and open leadership opportunities to a new generation.â€

The gala, in which Nationwide and Verizon Communications served as co-lead sponsors, provided a powerful platform to honor corporate trailblazers, and, at the same time, reaffirm the mission of the organization of more than 600 members–many of whom are associated with the nation’s largest corporations. Under Parker’s leadership, the ELC has actively expanded its membership to include BE 100s CEOs and black leaders abroad, among others. In fact, the group will hold its second leadership development session in the United Kingdom next year, as part of its initiative to drive more offshore conversations related to corporate diversity and inclusion.

The gala coincided with its annual conferences–the CEO Summit, which had roughly 300 CEOs focus on “Leadership Beyond the C-Suite,â€ and the Mid-Level Managers’ Symposium, a professional development seminar for more than 800 prospective managers.

Other event highlights included the following: