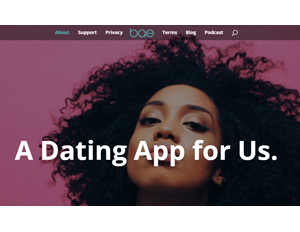 No, not your bae; the Bae app. The startup has announced that it will officially be included in Facebook’s prestigious FBstart Accelerate program.Â  The program offers up to $80,000 in in-kind services/support to help startups build, grow, and monetize.

Facebook has also invited the Bae team to be one of 30 businesses across the world to present and beta their new products at Facebook’s global conference, F8.

Bae, which stands for “Before Anyone Else,â€ is a dating app “where people of color, meet, chat and date.â€ Founders Brian Gerrard, Jordan Kunzika, and Justin Gerrard have all been featured in BE Modern Man.

The three founders are also app developers. “With Bae, we see our narrative as means of challenging these stereotypes to provide a more multifaceted lens into the lives and professions of individuals inside of our communities,â€ the Bae team told BE Modern Man exclusively. The team finds it extremely important that men of color like themselves are represented in the app development space because of the need to break down the cultural mindset of what an app developer looks like, a process recently boosted by the #iLookLikeAnEngineer campaign.

The app launched in April at Howard University and even has international exposure, registering as a top 50 Lifestyle app in 5 African Countries. This was accomplished without funding; only word-of-mouth virality and the usability of the product itself. Bae uses a proprietary algorithm to deliver the best potential matches to its users every 8 hours. For users (known as “Baesâ€), this experience is completely seamless.

Facebook launched FBstart in 2014 as a program to help startups succeed. It partnered with several other tech companies in the effort including MailChimp, Adobe, SurveyMonkey and others.

Once accepted into a track, app developers will receive a set of free tools and services meant to serve your app development needs and mentoring from Facebook.

As of late last year, the program has hand-selected more than 7,200 startups to participate, with more than 30 partners supporting. These companies have received $250 million in benefits and resources from FbStart, reports VentureBeat.