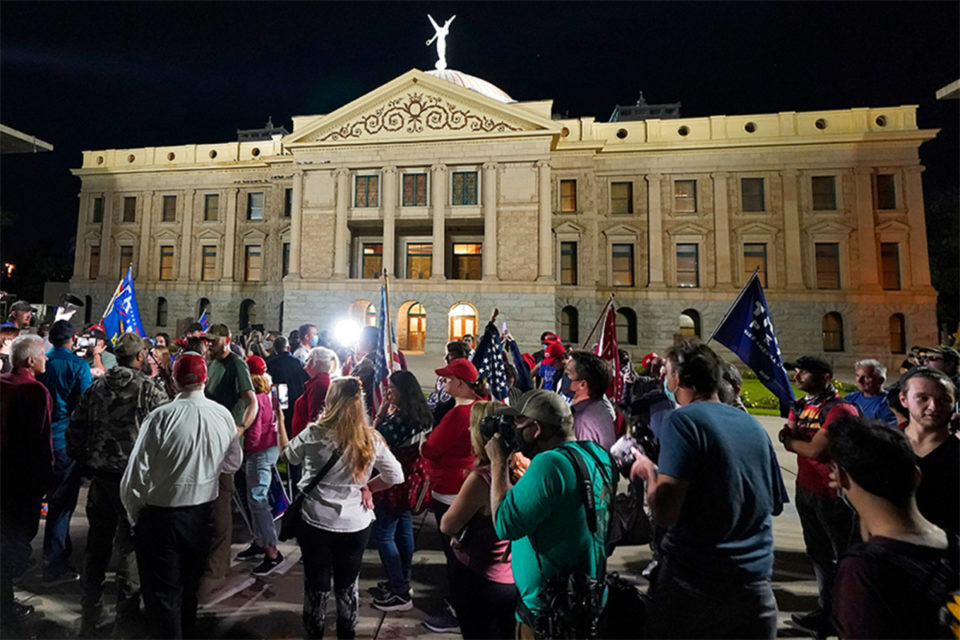 President Donald Trump has been urging the remaining states to stop the count, alleging that the ballots currently being counted are “fraudulent.” Now, groups of people in various states have begun to protest for their state and local governments to stop processing votes for the presidential race.

Since Wednesday, a pro-Trump Facebook group called Stop The Steal had amassed over 300,000 members since its creation, calling for its members to take to the street and protest the vote counting, claiming voter fraud, fueled by Trump’s recent speech. The group began to encourage members to place their email address on a list to make a call for “boots on the ground.” The social media network has since removed the group from the platform after calls for violence were allegedly made.

“The group was organized around the delegitimization of the election process, and we saw worrying calls for violence from some members of the group,” said Facebook spokesperson Andy Stone to NPR. “He said the decision was made “in line with the exceptional measures that we are taking during this period of heightened tension” because the group “was creating real-world events.”

According to the Guardian, the group was established by a right-leaning nonprofit group, Women For America First, with Tea Party activist Amy Kremer serving as one of the groups’ administrators. Critics and civil rights advocacy groups warn of the danger of these hyper-partisan groups and their influence on current events that can lead to real-life consequences.

“Social media platforms can’t allow themselves to be used to foment anti-democratic and potentially violent activity,” said Paul Barrett, deputy director of New York University’s Stern Center for Business and Human Rights to Reuters. As Facebook becomes more and more pressured to curb the spread of misinformation on its platform, the social network decided to temporarily stop its feature of suggesting users join any political group ahead of Election Day.