Family Affair: Father and Son Graduate from FAMU Together 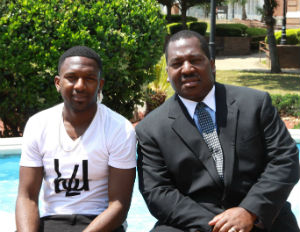 Having one graduate in the family is more than enough to celebrate, so imagine how a family feels when they have two members walking across the same college stage?

For father and son duo Sherwood Brown Sr. and Sherwood Brown Jr., Saturday, May 3rd was a day of major celebration as they both walked across the stage and received their degrees from Florida A&M University’s School of Business and Industry.

“It was not planned,” Sherwood Jr. tells the school’s website. “We just looked up one day and realized that we would both be graduating at the same time.”

Sherwood Sr. received his bachelor’s degree from FAMU in 1989 and made a promise to himself that he would return to complete their MBA program. His son, Sherwood Jr. entered FAMU in 2008 with plans to pursue music, but with the university still finalizing its music industry bachelor’s degree program, the younger Sherwood took an alternative route and enrolled in classes in both SBI and the Department of Music.

“I knew what my ultimate goal was, so I did everything in my power to get there,” said Sherwood Jr. “Although there were times when I got weary and could have easily went forward with pursuing a career in music full time, I know–through the encouragement and example of my parents–that I had to do things in order and finish my degree.”

The Brown’s say their family mantra is, “If you start something, finish it,” and this past weekend they did just that.