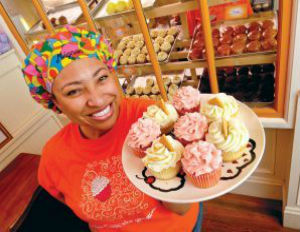 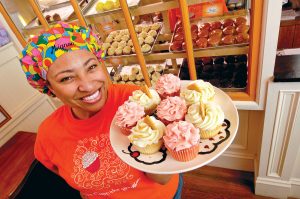 For Mignon Francois, founder of The Cupcake Collection, “Entrepreneurship is the ability to believe in a dream big enough to follow it and start wherever you are each day until the dream is not only a reality, but perfection.”

Francois combined her desire to launch a business with her college chemistry studies to create a formula for the art of baking. Deep in debt and caring for six children along with her husband, she started selling cupcakes from her living room in 2007 with her grandmother serving as chief taster and advisor. By 2008, The Cupcake Collection, a boutique-style bakery featuring made-from-scratch cupcakes and wedding cakes, was launched in Nashville, Tennessee’s historic Germantown area.

Thanks to Francois’s entrepreneurial drive and determination, The Cupcake Collection was the recipient of the 2016 Black Enterprise Small Business AwardÂ in the category of Family Business of the Year. This particular award is presented to a family-operated business that exemplifies the combined experience and expertise needed to excel in a key industry.

Launched in 1997 to specially recognize African American entrepreneurs for their accomplishments in cultivating successful small businesses, the Black Enterprise Small Business Awards are distributed every year at the Entrepreneurs Summit. For a second year, the Small Business Awards Luncheon was hosted by KOCH Industries and joined by Georgia Pacific L.L.C. This year’s winners represent how innovation and invention spur growth and maximize success. Altogether, there were 12 nominations in four categories, including Franchise Company of the Year, Techpreneur of the Year, and Teenpreneur of the Year.

Perhaps the most popular flavor at Francois’ cupcake shop is a sweet potato cupcake, which was inspired by her hometown of New Orleans, which her family fled following Hurricane Katrina. “My mother-in-law inspired and gave me the idea for it,â€ she notes. “You just can’t live in the south and not love sweet potatoes.â€

That sweet influence spreads far beyond the city line, with The Cupcake Collection having gained national attention by appearing on ABC’s The Chew and ranked No.10 in the Best Dessert Food Truck in the U.S. national ranking.

Forget Tech Startups, This is an Entire City Startup

A Still Necessary Lesson For Our Black Sons: The Police Are Not Your Friends

FacebookTwitterYoutube
← Forget Tech Startups, This is an Entire City Startup ← A Still Necessary Lesson For Our Black Sons: The Police Are Not Your Friends
×
'