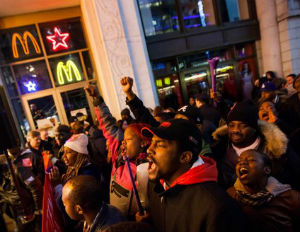 New York fast food workers who say they can’t live off of minimum wage are protesting restaurants for higher wages. Joining aÂ fast-food labor campaign called Fast Food Forward, workers (who are paid a minimum wage of $7.25) are going on strike at many restaurants such as Wendy’s,Â Taco Bell and Burger King for paying wagesÂ workers struggle to live on.

Between 400 and 500 fast-food employees in New York City are expected to take part in a one-day citywide strike.Â The organizers behind Fast Food Forward are calling for an industry wage of $15 an hour in New York City.