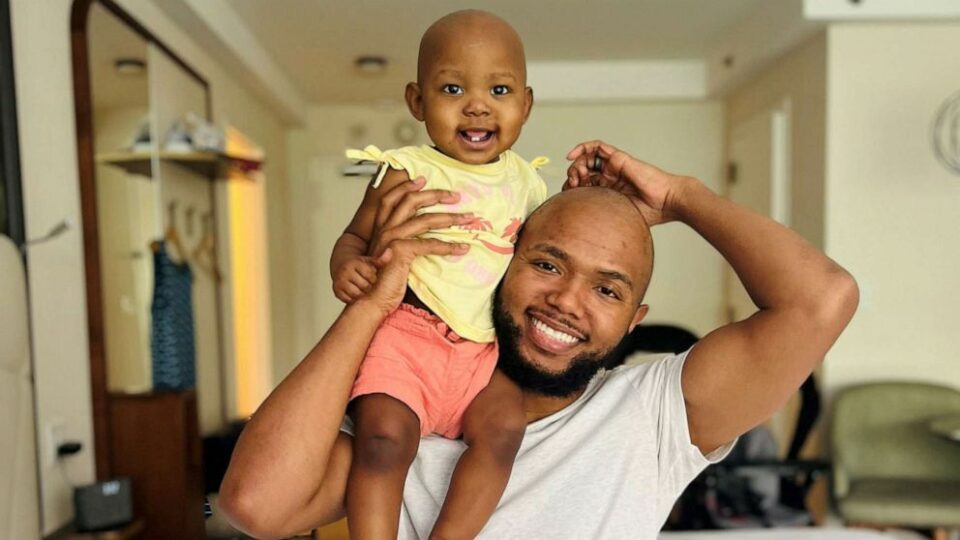 A father’s loving commitment showed up and showed out for his one-year-old daughter.

Kevin Stokes of Conway, Arkansas, had been growing his locs for 10 years before shaving it off to support his younger daughter, Nova, who lost her hair after undergoing chemotherapy, Good Morning America reported.

In March, baby Nova was diagnosed at just nine months with stage four neuroblastoma, a type of cancer that mostly affects the nerve cells of infants and young children, according to the American Cancer Society.

The stage of a neuroblastoma describes how much cancer is in the body. Stage four signifies that the cancer had spread to distant parts of the body such as lymph nodes, bones, liver, skin, bone marrow, or other organs.

Nova’s parents recalled when they noticed the first signs of stomach swelling. They immediately rushed her to the emergency room.

“All of that day, she [was] fine up until later that evening. She just seemed really tired,” Nova’s mother, Nicolette Stokes, told Good Morning America. “And yeah, when we got the news, honestly we were devastated.”

“I think cancer was really the last thing on our minds when we spoke with the doctors,” said Kevin Stokes.

Nova began her first round of chemotherapy in April and quickly started losing her hair.

“That was a very emotional day for us,” said Kevin.

“It happened so fast,” Nicolette said. “Like, it honestly happened in a span of a day. It started to fall out the previous night, and then the next day, it was just like over half her head was bald, so we went and just cut the rest.:

A month later, the father of two decided to part with his beloved decade-long locs because he said it “felt like it was something I needed to do.”

The Stokes documented Kevin’s hair transformation on TikTok, with a caption that read, “Anything for baby Nova!”

“[Both of our children] just stared at me,” Kevin said of his bald head debut.

“And then as I got close to them, smiling, I picked her up,” he added  “She’s like, ‘Aw, this is daddy,’ She started smiling and she touched my head and she was rubbing it and slapping it. So it was a shock for them but they came around to it.”