The Sighting of Irises, Lillies On National Park Battlefield Gives Life To A Lost Black Community 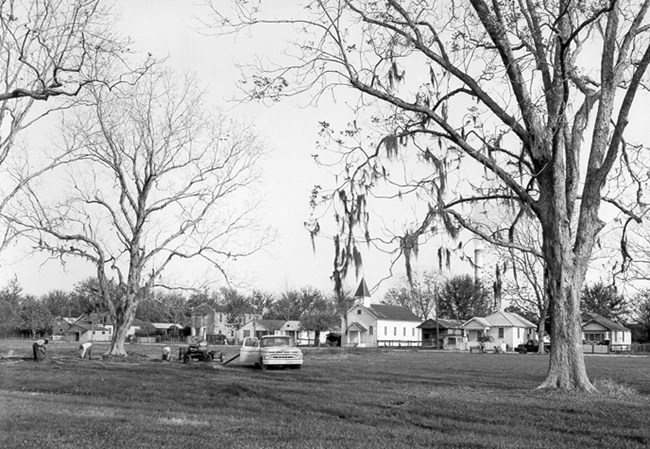 Over 100 years ago, a historic Black community of newly freed slaves was born in the middle of what was once the Chalmette Battlefield, the site of the January 8, 1815, Battle of New Orleans.

In 1963, Fazendeville also known as “The Village,” was demolished by the government to expand the territory into a national park commemorating the Battle of New Orleans and Civil War casualties. The land stood between where the battle was fought and the Chalmette National Cemetery, where the burial grounds of Union troops were located.

For Woody Keim, a great-great-grandson of the community’s founder, Jean-Pierre Fazende, the blooming of these flowers reminds him of the thriving Fazendeville before it was torn down.

“Even though the government tried to erase this village, there’s still life raising its little flowery head to show there once was a community here,” he said.

In the 1870s, Fazende, a free man of color and grocer from a family prominent in the social class known as free people of color, inherited a plot of land after the Civil War and divided it by selling the pieces to newly freed slaves, according to the National Park Service. The land turned into a small village that included 30 homes, a church, a baseball diamond, bars, a grocery store, and a school that transformed at night into a dance hall.

“I think it’s a tragedy that a community that had been there for close to 100 years was not considered as important as an event that took place over five days in 1815,” said Keim, who recalls being five years old when Fazendeville ended.

Gary Salathe, who established a group to rescue native irises and replant them in visible areas in nature, first noticed the irises on the battlefield. He confirmed that the long, tall leaves growing in the grass were in fact irises. After a month, he returned with park rangers to find that the flowers had bloomed. They discovered the irises, but also an African species of crinum lilies that were most likely brought over by enslaved people, .

“They would have had to be planted by people,” Salathe said, adding that the irises were blooming on the side of where houses once stood.

In effort to make the flowers visible, Salathe asked permission to relocate some of the irises and lilies. Park ranger Kim Acker told ABC News —that the park is considering his request.