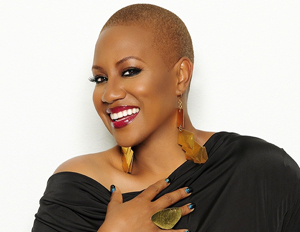 With her sights on empowering women to go beyond styling tools, moisturizers and shampoos to grow healthier hair, Felicia Leatherwood has shown thousands of women from the U.S. to Paris and Senegal to Germany and London, how to transition from relaxed to natural hair.

As if that were not enough, she has also styled the natural tresses of some our favorite celebrity power women—Jill Scott, Nicole Ari Parker, and Tomiko Fraser to name a few. And, her work has appeared in Essence, In Style, People magazine, as well as in film and television.

Affectionately dubbed the “Hair Whisperer,â€ Leatherwood has been known to spot hair and scalp issues related to diet or stress by simply examining the state of the hair.

BlackEnterprise.com caught up with her to discuss how she went from local stylist to global haircare guru, igniting a “love your hairâ€ movement worldwide.

BlackEnterprise.com: How did you get started in the hair industry?

Felicia Leatherwood: At 9 years-old, my parents gave me my first Barbie doll head to play with and style her hair, but I didn’t grow up saying I wanted to be a hair stylist.

Initially, I worked for BET, Fox and Warner Bros in various production support positions. During that time, I was just playing with my own hair and styling my friend’s hair, so I decided I wanted to go to cosmetology school. The funny thing is, most people thought I would need to get a back up job because I couldn’t make a good living off of just doing hair.

After cosmetology school, I started working at a salon called Millennium in LA. I came across some up-and-coming celebrities at the time [including Anthony Anderson, Martin Lawrence and Cedric the Entertainer.] I worked at BET, and I spent a lot of time traveling with the celebrities I worked for, so my name and celebrity client list grew by word of mouth.

I’ve been styling natural hair now for 15 years, and it’s been an amazing journey for me ever since.