How This D.C. Couple Found a Niche Market for a FastSigns Franchise 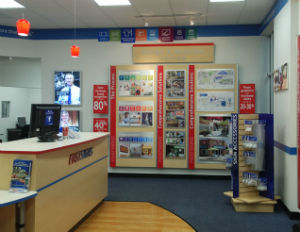 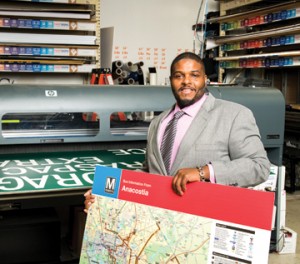 Howard James Jr. left the Washington, D.C., arts scene for the business world. A former theater production teacher for 17 years at the Duke Ellington School of the Arts and department chair for the last seven years, James became a franchise owner in 2007. He and his wife, Dana, opened a FastSigns location in his hometown about two miles from the U.S. Capitol building.

The idea of opening the location came to James after he drove 45 minutes to a FastSigns store in a Washington, D.C., suburb looking to purchase items for a project. The lack of local signage providers spurred him to open the first FastSigns store in the area. The result: James found a niche and business has grown steadily since. Revenues for 2012 reached $1.2 million, with 2013 expected to total $1.3 million to $1.4 million.

FastSigns provides signs, graphics, printing, promotional products, and related marketing services. Since 1986, it has become a leading brand concept with a growing network of more than 540 locations in eight countries. The franchise has grown to offer specialized services such as digital signage, imaged glass, and mobile websites. Its newest tech offerings include 3-D printing services for making prototypes and architectural models.
According to Washington, D.C.-based International Franchise Association, an industry trade association, roughly 825,000 franchise businesses across 300 different business categories provide nearly 18 million jobs and generate more than $2.1 trillion to the economy. There are an estimated 3,000 different franchise business companies (franchisors) operating in the U.S. today. FastSigns is also among the hundreds of franchisors offering certain incentives to veterans, women, and minorities through their participation in the IFA’s VetFran or DiversityFran (formerly MinorityFran) programs. These incentives include reduced franchise fees or royalty payments.

FastSigns offers a 50% discount to veterans off the franchise fee of $36,500, or $18,250. It provides reduced royalties for the first 12 months. The total investment to open a store ranges from $141,197 to $165,499. The Jameses’ total investment was around $175,000. Using a home equity loan, the couple secured financing without tapping into their savings. The outlay is paying off. Even during the financial crisis, James says revenue was flat but consistent at $500,000 a year between 2009 and 2011. In 2012, sales grew 92% over sales of the previous year, because he landed a number of ongoing contracts.

James’s store prints and installs schedules at stops for the nation’s fourth busiest transit system. Strong customer retention, repeat business, and new customers through client referrals fuel the store’s growth. Clients consist of local and federal government agencies, large corporations, and small businesses. The Washington Metropolitan Area Transit Authority (Metro), that serves more than 700,000 people daily in Washington, Maryland, and Virginia. is among James’s largest customers. To keep his business flourishing, the 46-year-old CEO hopes to become his own landlord by acquiring a building in the next year. The move could double his store’s size to about 6,000 square feet, allowing him to install more equipment and do graphics work on vehicles indoors.

“For anyone looking to buy a franchise, it is important to identify franchisors that have good relationships with their franchisees,” says Kevin Hicks, a partner with Blackman and Associates, a franchise consulting firm with offices in New York and Atlanta. “You want to learn what the company offers in the way of training, marketing, and purchasing programs,” he adds. For instance, a larger franchise system is able to buy in large quantities, driving down costs. Hicks says the franchisor’s business and marketing plan will provide clues to the level of support you’ll receive.

James acknowledges the top-notch training he received. Training for new FastSigns franchise owners includes a week at a FastSigns center, two weeks at its Dallas area headquarters, and one week onsite at the franchisee’s new center. To drive traffic, there is also a pre-opening marketing blitz. That level of training provided James with the skill set to perform effectively in an industry he initially knew very little about. “It allowed me to get my staff up to speed so they could serve our clients as professionals and not just as order takers,â€ he adds.

For James, his main challenge was the fast growth, which required him to constantly update his equipment, staff, and the facility to meet demand as well as stay on top of technology. He had to constantly change his way of thinking. Operations had to be adjusted often. The FastSigns corporate office does the research and advises its franchisees on new best practices and processes.

Another challenge is staffing.

“It’s hard to maintain quality staff, but there are a lot of community outreach recruiting programs in D.C.,â€ which the franchisor utilizes. “The good thing about this is that they bring in good employees, pre-train them, and teach them life skills.â€

Through these programs, James can employ people temporarily to find out if they’ll be a good fit for his business.