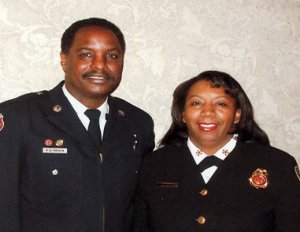 Rosemary R. Cloud, the first ever black woman fire chief in the United States, is set to retire after a three decade career, according to Atlanta Daily World. “‘I want to emphasize that I will forever be grateful to The City of East Point, and the Fire Department for having given me the opportunity to be a part of such immense accomplishments and the endeavors we have had over the years,’â€ she said as reported on the site.

Since the beginning of her career, Rosemary Cloud quickly excelled and managed 35 fire stations and 1,030 employees to date. On May 6, 2002, she was made the East Point Fire Chief after serving as Assistant Chief of Fire Operations at Hartsfield Jackson International Airport.

Her feats extend far beyondÂ her hometown of Atlanta, as sheÂ sat on the White House National Security Council as an Appointed Subject Matter Expert on HSPD-8 and recommended revisions to The National Strategy for Homeland Security. In 2010, Chief Cloud was inducted into the International Women in Homeland Security and Emergency Management Hall of Fame and has received other notable awards and honors, including the Millennium Pacesetter Award from the Atlanta Business League, Atlanta’s Top 100 Black Women of Influence by the Atlanta Business League, and Pinnacle Leadership Award from Delta Sigma Theta.

The same commitment Cloud has shown in her career is mirrored in her commitment to the community. EastPointCity.org reveals that the history-making fire chief currently mentors local youth through special programs with schools and youth organizations, and she has initiated more than ten community service public safety programs in East Point. “It feels like I’m standing at the free throw line with a second or two left in the game,” Chief Cloud told BlackEnterprise.com in 2002. “I’ve made it many times and I know I’ve got all the support here for me to make it. My steps are ordered by God.” On Tuesday, January 20, 2015, Chief Cloud will be presented with a plaque and proclamation at the East Point city council meeting.