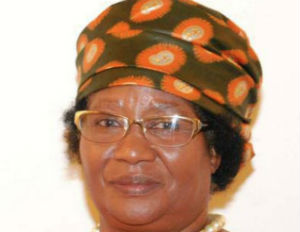 As Malawi’s first female president and Africa’s second, Dr. Joyce Bander’s legacy and career make it clear; she is a powerful voice for the voiceless. A fierce defender of women and girls’ rights and economic equality, Dr. Banda has made international headlines as one of Forbes most powerful women in the world. From 2012-2014, she transformed the narrative about the Malawi government when she cut her own salary by 30 percent, dismissed members of her cabinet amid a corruption scandal and sold off a $15 million presidential jet and a fleet of 60 government-owned Mercedes limousines. If this isn’t enough her work as an entrepreneur, activist, politician, and philanthropist, isn’t over yet.

So, how does a woman who was once told by a senior ruling party official,
“She will never be president. How can a mandasi [fritter] seller be president?” rise to lead a country in Africa? On the heels of her anticipated appearance as the keynote speaker and distinguished honoree for the 2015 Global Connections for Women Awards Gala, being held on March 7, 2015 in Washington D.C.,Â Black Enterprise caught up with Dr. Banda to learn more about her courageous journey as a global woman champion.

After surviving an abusive marriage, you made history as Malawi’s first female President. What were some of the first steps you took to position yourself as an entrepreneur and political leader?

Being in an abusive marriage made me aware that economic empowerment is key to social and political empowerment. I set an agenda to achieve empowerment for myself; I swore I would never find myself vulnerable and abused.

I got married again to a better husband. One of my requirements in getting remarried was that he would let me be empowered economically, socially, and politically. So I settled into my marriage and started a business. After 5 years of realizing economic empowerment, I became more aware of the inequalities faced by other women. I made it my life’s mission to help other women become financially independent.

I became a voice for women in my community, which lead to being a voice in political and legal spheres. The activism grew from my own experience and passion to see other women prosper.

What is the toughest decision you’ve ever had to make?

Personally–walking away from an abusive marriage. Socially you had to look good and that meant staying in a bad marriage. But I thought of my children and I wanted them to know another way.

Professionally–launching the fight against corruption in Malawi. Other leaders on the continent cautioned me against it. They told me I would pay heavily. Believe me, I suffered. Most leaders would hesitate to fight. Even now I am persecuted for what I did. But I knew I was deciding between the people of Malawi and being re elected. I chose the people. I put my neck on the line to put people first. But that is what leadership is about.

Sometimes while on your career journey, it’s necessary to break the rules or defy the laws of tradition. Can you tell us about a time when you went against the norm?
When I was asked to ask to serve as Vice President, I was in my comfort zone at a ministry and everyone in Malawi knew that a VP role was a death wish. As a VP people would persecute you unnecessarily. Every VP before me had suffered. It was a very difficult choice for me and I initially said no at first but later decided to enter the election.

Obviously as soon as we were elected, I knew I had been tricked and would have no power. The former president requested that I endorse his brother. I said no. The people’s rights were more important. It would have been easy for me to sit quietly and let the President have his way, but I decided to stand up for my country and myself.

What would you like to see more of from women in business?

I want women to graduate from petty trading in Africa. Women have contributed more to the economy. It’s time to recognize their contribution and help them build medium and large-scale businesses. Providing economic empowerment opportunities for women will empower them to walk away from abuse, and lead to more business opportunities for other women.

What companies and organizations have you created to help women become more financially independent?
I formed the National Association of Business Women. A 1988 Impact study funded by USAID, reported 73% of the women were able to come out of poverty, send their children to school, provide better healthcare for their families and contribute to decision making in and out of the home. Additionally, the same study found 40% of the women developed small and medium size businesses and then they created jobs for fellow women.

What’s your advice for women struggling with judgment and criticism?

We still live in patriarchal societies where it is still not acceptable for women to be placed in leadership positions. But it’s not just men that block women. Other women block women. Women don’t help. They are their own biggest enemy. They let men treat them poorly and put them down. Usually I have found that if a woman confronts me, there is man behind her that has abused her.

The best thing to do is work to achieve what you want and prove them wrong. Don’t confront or fight. Just show them. There will be human roadblocks all along the way. Just take another route. As women we must continue to partner. And we could benefit more if we all worked together: the West and Africa.

What skills do you look for when building a leadership team?
I don’t look for paper qualifications. Leadership is not found on paper. For me loyalty, honesty and integrity overtake qualifications.