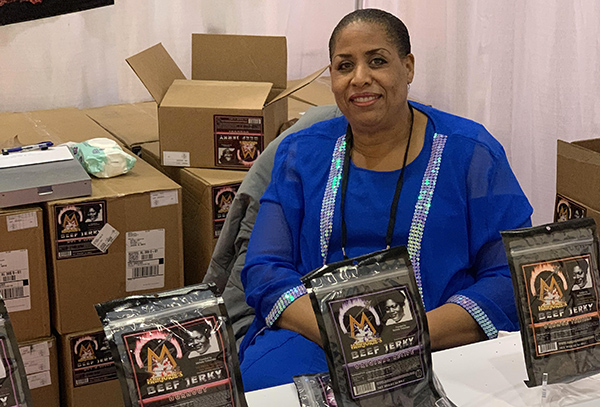 Marjorie’s Beef Jerky is the only black woman-owned company that makes, distributes, and sells beef jerky in the country. Michelle Timberlake, founder of the beef jerky company, produces a jerky that is like no other on the market.

“Our beef jerky is premium meat, high in quality, high in protein, with no MSG or preservatives outside of the soy sauce. Even more, it’s only 150 calories per bag” said Timberlake.

Marjorie’s Beef Jerky has sold hundreds of thousands of cases and the product has been distributed via the National Football League and Major League Baseball.

Timberlake often encourages people to try her product even if they aren’t fans of beef jerky. She says people often become new customers after tasting her version dehydrated meat.

The woman pictured on every bag of Marjorie’s Beef Jerky is Timberlake’s mother, the late Marjorie Leona Dawson. Her mother was her hero and mentor and gave her the courage to start her own beef jerky brand.

“It took 27 years for someone to give me that break by believing in me, and now I am here with the biggest tastiest beef jerky that money can buy! And I owe this thanks to my mother, who told me that she wouldn’t live long enough to see my products come out on the store shelves.”

“But my mother knew how determined I was,” she continues. “And I promised her that the world will see her face on every bag, and that I would name the company after her.”

With her mother gone, her father, James Timberlake, now has stepped in to assist her in the business. There is even the possibility of using his BBQ sauce recipe as a replacement for hers in future jerky products.

Timberlake adds, “My mother is now gone, and my father, James E. Timberlake, has stepped in and helped me to get my products noticed all over the world. Having my father by my side really helps me with the loss of my mother because he stays involved and talks to me about the company’s success and potential. I am so grateful to my father for that because I love that he is involved in giving me advice, and he always has uplifting things to say to me.”