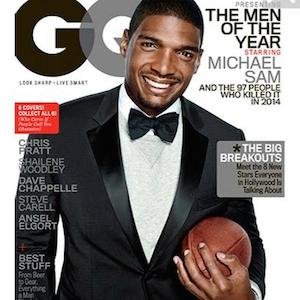 If you’re big on controversies in sports then you’re already familiar with the name of Michael Sam. The 2013 SEC Co-Defensive Player of the Year and first openly gay NFL player might not be on a team currently, but he’s definitely distinguished to be named one of GQ’s Men of the Year for 2014.

The former Dallas Cowboy practice squad attendee nabbed the honor and includes an interview with the magazine, which will come out later this week. Sam, 24, did spread the word through his social media by tweeting to GQ and his 198,000 followers the noted distinction.

Sam was drafted into the NFL by the St. Louis Rams last spring and is one of six members of GQ’s “Men of the Year” rollout. Fellow stars are Dave Chappelle, Shailene Woodley, Ansel Elgort, Chris Pratt, and Steve Carell.