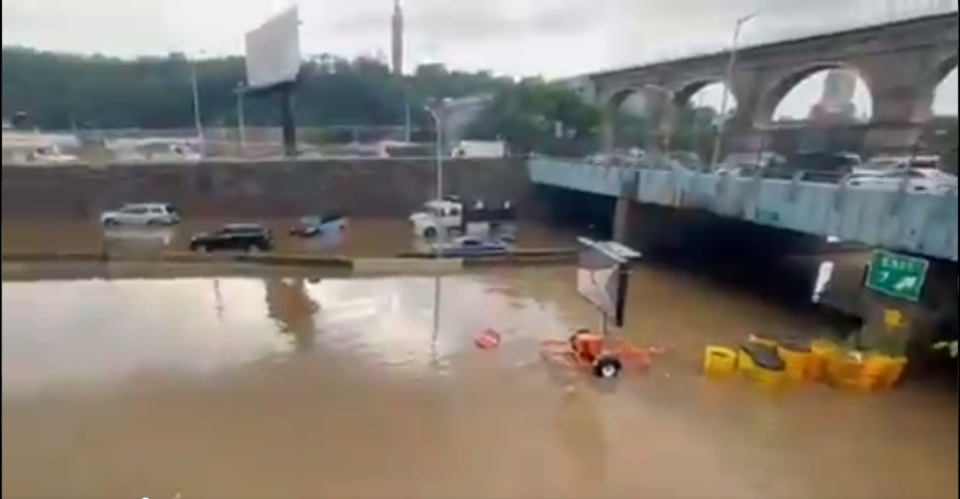 The rain, which hit New York ahead of Tropical Storm Elsa, showed just how unprepared it was. The rain came hard and the streets and subways, especially in the Bronx and Harlem, were quickly overwhelmed. At the 149th Street station on the 4 line, floodwaters poured in, down the stairs onto the subway platform. Riders at the Spring Street station were forced to walk through rainwater just to leave the station.

At another station, straphangers were forced to use plastic bags like potato sacks in order to stay dry and get to their trains, and cars were stuck on highways across the city including the Major Deegan Expressway. The video that took the cake, however, was at the 157th street station on the 1 train line.

Inside the station, straphangers there were forced to wade through water so dirty, a wastewater treatment facility may not be able to clean it.

“People were pacing back and forth deliberating whether they were going to brave the waters or not,” said Paulee Wheatley-Rutner, a 31-year-old who witnessed the scene told the Gothamist. “Most didn’t, but some did.”

Outside the station, the streets were just as flooded as the rain turned the street into a small lake.

Many city residents expressed their frustrations on social media at the fact that subway infrastructure, delays and prices keep rising as the quality of the service gets worse.

The city’s government isn’t helping either. Mayor Bill de Blasio and Governor Andrew Cuomo have spent years pointing the finger at each other when it comes to who controls the Metropolitan Transportation Authority and the subway system while New Yorkers suffer.

Fresh off his Democratic primary victory, Eric Adams jumped into the issues and quickly upset city residents with his idea of congestion pricing for the subway.

This is what happens when the MTA makes bad spending decisions for decades. We need congestion pricing $ ASAP to protect stations from street flooding, elevate entrances and add green infrastructure to absorb flash storm runoff. This cannot be New York. https://t.co/F6A5K4ahQT

In the replies, many pointed out that congestion pricing will affect the low income areas, such as East New York, Brooklyn, that voted for Adams and pushed him past a wide group of opponents. Other pointed out the fact that the base fare has increased from $2 in 2009 to $2.75 today and subway stations are still littered with broken tiles, leaks and waste.

Infrastructure in the state of New York is in need of serious upgrades. The state was given a C-minus for its 2021 infrastructure report card. Issues outlined in the report included broken and pothole-filled roads which cost motorists more than $600 a year in auto repairs. Ten percent of bridges in the state are structurally deficient and 424 dams are considered to be high-hazard potential.

Other areas across the country are dealing with the same issues as municipalities have ignored climate change. The New York Times recently profiled Chicago, which was largely built on a swamp and how rising water levels could devastate the city. Texas residents won’t soon forget how sub-freezing temperature for one week brought the state to a standstill, busting pipes, leaving millions without drinking water and sending Ted Cruz running for Mexico.