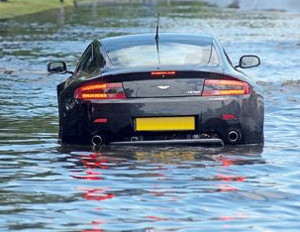 During Hurricane Sandy, hundreds of thousands of vehicles were covered in several feet of water. While many of these cars have been marked as totaled and were sent to junk yards, there is a growing business of reselling these vehicles for parts or in some cases as slightly used to unknowing drivers.

The Insurance Crime Bureau estimates that over 230,000 cars were damaged by the hurricane, mostly by ocean water that came over seawalls & barriers before flooding seaside communities, filling vehicles with saltwater that corroded electronics, destroyed leather and ruined engine blocks. While most cars have clear evidence of flood damage such as a mildew smell, condensation in the headlights, etc., some unscrupulous dealers have no problem rebuilding a vehicle and selling it as new.

“People masquerade those things as perfectly good vehicles without any hint that they had been flooded or exposed to water,â€ said Frank Scafidi of the National Insurance Crime Bureau. “There is a market for these vehicles, even though we might never want to see them on the road again.â€

While Hurricane Katrina and other major storms shined light on the threat of reselling flood-damaged cars, industry experts and car dealers said legislative efforts have failed at both the state and federal levels to stop the resale of damaged vehicles. While most states require cars that were destroyed by flooding to have their titles marked, some states such as Colorado and Vermont allow cars to be re-registered for a title, without the flood branding. Some flood damaged vehicles are shipped off to countries such as Nigeria where lack of regulations allows the cars to be legally offloaded to anyone, without any mention of flood damage.