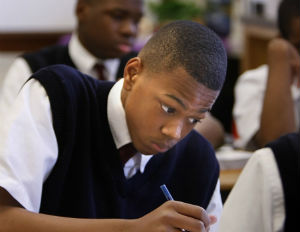 Florida’s recent decision to set different academic benchmarks for its students according to their races has attracted anger from critics who say it holds children of color to lower standards. But the state says that its targets, which must be hit by 2018, have been misunderstood, according to the New York Times.

Less than 40 percent of blacks and just over half of Latinos currently read at grade level. The state says the goal is to get that number to 100 for all groups within a decade, but that it needs different benchmarks for the halfway point.

In Florida, halving the achievement gap means that by 2018, 72 percent of low-income children, 74 percent of black students, 81 percent of Hispanics, 88 percent of white students and 90 percent of Asians should be reading at grade level. The projected gains would be larger for those on the lower end of the scale.

“This is a snapshot of roughly halfway through that 10-year mark,â€ said the Florida education commissioner, Pam Stewart. “The 100 percent is the ultimate goal, and that is stated within the strategic plan.â€
But parent advocacy groups, and some school board presidents and superintendents, said establishing lower goals for black and Hispanic students sends a disturbing message that those students are not as capable as others.

“Setting goals on skin color implies it somehow affects what is being measured,â€ said Melissa J. Erickson, president of Fund Education Now, a parent-driven advocacy organization in a letter sent Wednesday to the federal Department of Education. “I believe our nation long ago abandoned this type of view.â€