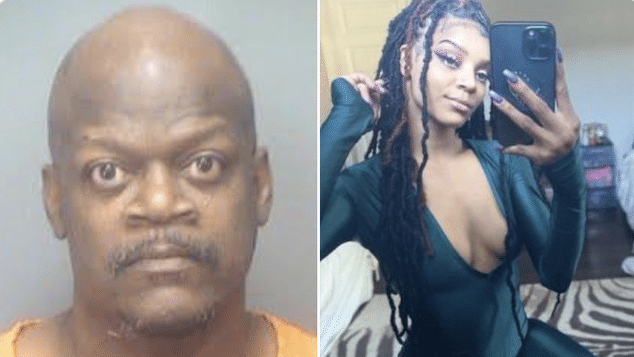 A father in Florida is in police custody and facing manslaughter charges after fatally stabbing his daughter while engaged in a fight with her boyfriend.

Laurence Green, 51, claims he stabbed his daughter Sidney Green, 22, by accident after she tried to break up a fight he was having with her partner, WFTS reports.

Things took a wrong turn after Laurence returned to their Clearwater home and found his daughter inside with her on-and-off boyfriend.

The argument escalated and spilled over into the parking lot of the Bay Cove apartments they live in. Clearwater Police Major Natalia Illich-Hailey said preliminary reports show the father was acting in self-defense.

“He at the time was defending himself from the boyfriend because he was being hit in the head by the boyfriend,” Major Illich-Hailey said.

“He intended to stab the boyfriend to get him off of him and that is when his daughter intervened between the two of them.”

Unfortunately, Sidney was stabbed in the stomach and later succumbed to her injuries at the hospital. Now, Laurence is mourning the loss of his daughter while dealing with serious charges.

Laurence remains held on a manslaughter charge at the Pinellas County Jail, NY Post reports. The boyfriend remains unnamed and it’s unclear if he was injured during the stabbing.