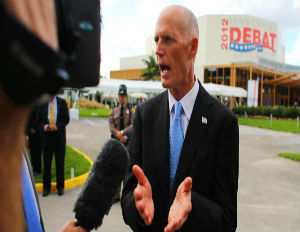 The move was surprising given the many complaints about the long lines for early voting in Florida and concern about how long the polls can stay open, complaints Governor Scott hasn’t addressed.

The town of Sanford and the state’s “Stand Your Groundâ€ gun law have come under scrutiny since the publicizing of the Trayvon Martin case.Â According toÂ Mother Jones, the Stand Your Ground law was sponsored by the same Republican legislatorÂ who helped shepherd Scott’s bill to shorten voter-hours last year.

“We need every single vote in Florida,â€ Romney told his supporters in SanfordÂ yesterday. “We can begin a better tomorrow, tomorrow.â€