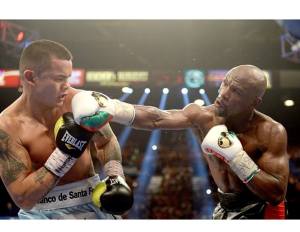 According to Forbes, a rematch has been set for Floyd Mayweather versus Marcos Maidana, who lost to Mayweather by a majority decision earlier this year. The bout is scheduled for Sept. 13 at the MGM Grand Arena in Las Vegas.

The first bout had one judge scoring it a draw at 114-114 while the other two judges gave scores of 116-112 and 117-111 in favor of Mayweather. That kept his record perfect at 46-0. Although Showtime didn’t officially announce the Pay-Per-View numbers, it was estimated that Mayweather-Maidana pulled in around 900,000 buys.

The fight will be co-promoted with Golden Boy Promotions, which is headed by former boxer, Oscar De La Hoya.

Timeline: What Has Obama Done Lately For The Country?

FacebookTwitterYoutube
← $52 Billion At Stake: Loan Declines for Small Businesses Hindering Advancement ← Timeline: What Has Obama Done Lately For The Country?
×
'