For Darrell Wallace Jr., an Add of a Victory to His Brand's Winning Smile 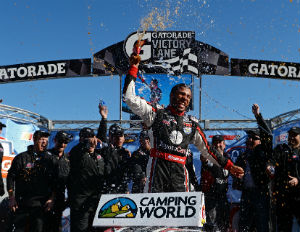 Before he found out that his client Darrell Wallace Jr. was leading his race with ten laps to go at what would become the first win of his career, he’d already received a formal proclamation commemorating the 10-year anniversary of the dedication of the stadium named in his honor at Baltimore’s Woodlawn High, his alma mater.

Reminders of his hardscrabble past were all around him.

He rushed, fumbling to get his Slingbox set up. A few minutes later, the checkered flag signaled his guy was a winner. Wallace Jr. was crying, and emerged from his No. 54 Toyota spraying soda that looked like it was shot from a geyser.

And before Liles knew it, his own tears were flowing.

“I cried for a lot of reasons,â€ Liles said in between meetings Tuesday by phone in New York City. “For the history he made, for all of the hard work he put in. I cried for his family, and for the struggle that goes into making sure he’s the best he can be. There’s so many different emotions, and knowing him, I just knew [his reaction] came from a place of honesty, integrity and respect for the sport.”

For Wallace Jr., it is a life that has been changed dramatically. With his win this past weekend at NASCAR’s Kroger 200 Camping World Truck Series race, the first by an African American in one of NASCAR’s three series in 50 years, Wallace Jr. has become something of a household name.

He stands out in a sport hungry for its next great superstar, a sport that has anointed him unofficially as its future.

Indeed, praise for the 20-year-old, Mobile, Ala. native is driven by two keys of his success: winning at the truck series level — or any level — is not easy. And given his youth and potential, people inside NASCAR know that in order for the sport to grow it has to expand its audience. One way to do that is to foster the young careers of its future stars, especially the ones who appeal to a wider audience, like Wallace Jr.

It’s part of why NASCAR created its Drive for Diversity program. His victory goes a long way towards validating the program in the face of critics who say ten years should have produced more results.

It’s already led some in the sport to suggest there’s too much pressure on him.

Wallace Jr. is more measured in his analysis.

“Those people need to remember it’s a tough sport,â€ Wallace Jr. told BlackEnterprise.com late Tuesday by phone from North Carolina where he was racing Go-Karts with his friends. “Me and Kyle Larson are trying to break through to the Cup level and we’ve gotten this far, and there’s more coming behind us. But it’s hard to win in this sport. More people are going to break through, but it’s going to take some time.”

“Hopefully, me winning will get them motivated.â€

He’s been humbled this past season. With perhaps the fastest truck at starts at Charlotte and Kentucky, mistakes there ruined his chances at winning, and made victory in Martinsville all the more satisfying.

“The biggest thing for me was the team still believed in me after our bad finishes. We probably had the fastest truck out there and we didn’t get to see the end result because of a rookie mistake. I felt happy for everybody, and myself. It’s late in the season and we only had four races left. The opportunities just hadn’t been there.â€

Wallace says he doesn’t feel like the sport is putting more pressure on him than he can handle; he plans to race two years in the trucks series, two at the Nationwide level, and then see what opportunities lie at the Cup level. If the chance comes up, he said, he would explore it, but that doesn’t mean he’s ready.

Since his win, Wallace Jr. has been making swift work of putting his brand out there, a key aspect of the career of any young driver at any level. He was a guest on Fox Sports 1’s NASCAR Race Hub on Monday, and even appeared on late night television’s ‘Arsenio’ (who even in the latest iteration of his show, is ever the early-adopter of black achievement in mainstream entertainment culture).

The congratulations and well-wishes came from far and wide: via Twitter, from some of NASCAR’s most popular drivers, and its CEO, Brian France. “We congratulate Darrell Wallace Jr. on his first national series victory,â€ he said in a statement, “one that will be remembered as a remarkable moment in our sports’ history. Darrell’s success … is indicative of a youth and multicultural movement that bodes well for NASCAR’s future growth.â€

With three races to go this season, Wallace Jr.’s win comes as he heads into the 2014 season with Kyle Busch Motorsports with room for sponsorships, his handlers say. Victory also helps Team Bubba leverage his visibility among brands, who might be looking into new and exciting sponsorship opportunities.

Nearly 1 in 4 Fortune 500 companies invest in the sport, an eight percent increase since 2008, NASCAR says.

Camping World and Good Sam joined to his No. 54 Toyota Tundra as the primary sponsor for 11 out of 18 races this year.

“Branding is hard to make a name for yourself. You’ve got to be out there doing media whether you’re winning or not. But I’m still a rookie, and there’s three races to go and we couldn’t be more excited.â€

He and his team were already thinking about next weekend, just a few minutes after he won. The transition took him by surprise, but he’s running off of a ton of confidence.

“I’m pumped up, and I really think we can get to two or three more wins. But right now we’re getting a lot of love and a lot of doors are opening and that’s good. We just have to focus on running good.â€

Liles says for Wallace Jr., the sky is the limit.

“That’s why I was so emotional,â€ he said. “I know where he’s been. I know how hard he wants to prove to everyone that he’s not just an African American race car driver, but he’s competing to be No. 1 NASCAR driver in the world.”

And hammering home that message is why Liles says that brands are beginning to take notice.

“Winning is something that does a lot of for anyone, no matter what you’re doing,â€ Liles said. “What was it for Venus and Serena to win their first major championships? What did it mean for Tiger Woods to win his first Masters title? It causes a certain urgency around what’s been going on in Darrell’s life. We’ve been racing the whole year and we just had a big New York Times article. That’s huge. We’ve gotten calls from everybody — media and sponsors — and a lot of them have just discovered the fact there’s a young, black guy that’s racing.â€

“I think outside of sports, any brand who wants to reach that 16-34 or 35-55 demographic that’s interested in sports, engineering, interesting in penetrating a sport that’s in transition, you want to be associated with Darrell. That’s why his win was so big. It’s a foundation.â€

“Who would say he’d say he’d win the race in Martinsville, just 30 miles away from Danville, Virginia where Wendell Scott is from?â€ Liles said.

Scott is, of course, the first African American driver to win: It happened on Dec. 1, 1963 at Jacksonville, Fla. His story was part of a recent ESPN documentary.

“That just goes to show you that it was in God’s time,â€ Liles said. “Work hard, and things will happen in God’s time.â€