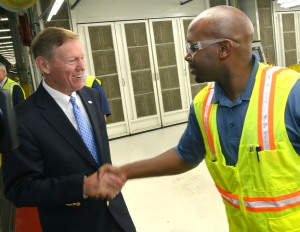 Some 1,400 jobs have been added to the beleaguered Detroit metropolitan area as Ford Motor Co. begins production of its popular Fusion model — the first of which are rolling out of the assembly floor today.

This is a shot in the arm for a city that has been hemorrhaging jobs for decades. The Bureau of Labor Statistics reports that the unemployment rate for the Detroit-Warren-Livonia metropolitan area was 10.4% in July, compared with 7.7% for the nation as a whole.

The automaker invested $555 million into the Flat Rock Assembly Plant, adding a state-of-the-art, fully flexible body shop to allow multiple models to be produced on the same assembly line, supporting Ford’s flexible manufacturing efforts. Ford says it plans to hire almost 6,500 workers in the U.S. this year to support new products, growth and investment; the company has added more than three-quarters of the 12,000 hourly jobs it committed to add in the U.S. by 2015.