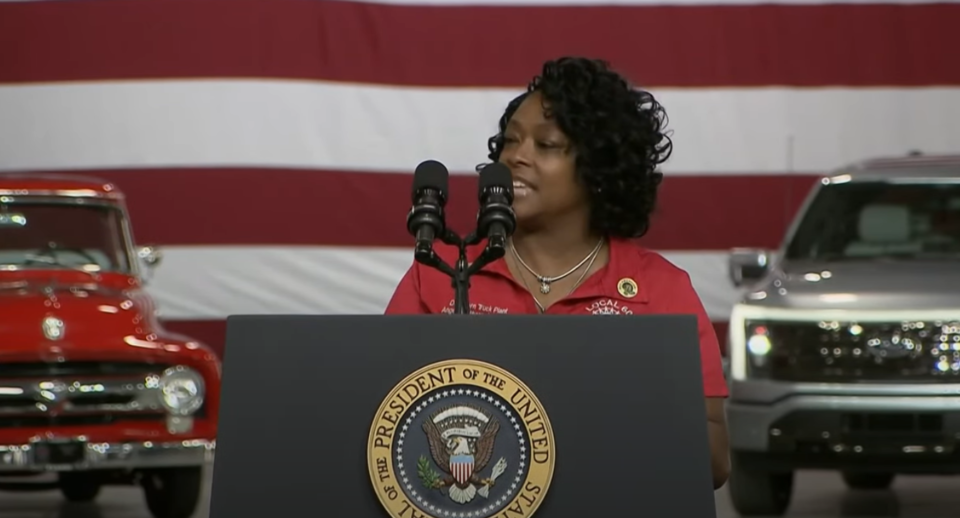 A mother of three and Detroit resident was “honored” to have been selected to introduce President Joe Biden during his tour of Ford’s Rouge plant on Tuesday.

Angela Powell has been working at the plant for seven years and never expected she would be given an opportunity to share a speech that the nation would hear.

“It’s a moment I’ve never experienced before,” she told the Detroit Free Press. “It’s a once-in-a-lifetime opportunity, and man, I just feel honored to be here at the right place at the right time. I couldn’t do nothing but thank God for the opportunity because I know it wasn’t anybody but Him who placed this blessing on my life.”

The UAW Local 600 trustee learned of the opportunity after receiving a call last week from the union’s leadership asking her to make the introduction. After sharing her speech, she hurried offstage to go talk about the experience with her children.

Biden visited the city for the first time as president ahead of Ford’s reveal of the F-150 Lightning pickup truck, the company’s latest all-electric vehicle, USA Today reports.

During her speech, Powell touched on Biden’s accomplishments during his first few months in office and how he aided in the response to the coronavirus pandemic with stimulus checks and support for workers. She credited him for being a “president who understands that in order for the future to work for us all, American workers can’t be forgotten or left behind in this transition for the future.”

She continued. “Future jobs need to be well-paying union jobs with benefits and Joe Biden gets that,” Powell said, noting that the president “came here to see us unveil the F-150 Lightning, which we are so very proud of.”

Biden followed up Powell’s introduction by speaking about the importance of the automobile industry going electric.

“The future of the auto industry is electric. There’s no turning back,” Biden said. “The question is whether we will lead or we will fall behind in the race to the future.”