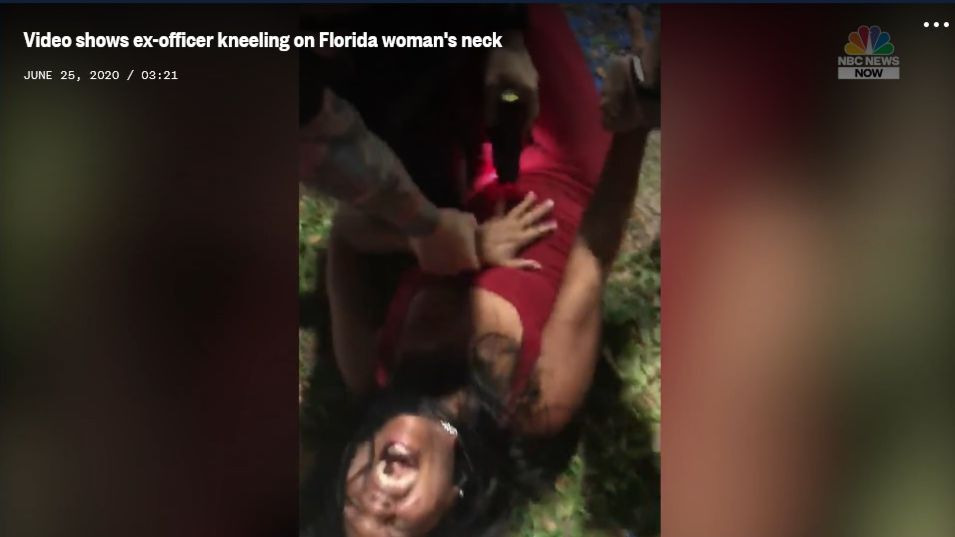 A former Florida police officer has been charged with battery and misconduct after a video surfaced showing him putting his knee on a Black woman’s neck. The former officer had also used a stun gun on her outside a strip club in January it was announced by a Florida state attorney earlier this week according to NBC News.

The former police officer, who also lied on the police report he filed, is 30-year-old Jordy Yanes Martel and he turned himself into the Florida Department of Law Enforcement’s Miami office late last week. He is facing two counts of official misconduct and four counts of battery.

Martel, 30, turned himself in on Thursday and was held in lieu of $6,000 bail. Despite arrest documents released in the case, the South Florida Police Benevolent Association stated that “We are without the usual information provided regarding the arrest.”

A video of the incident, which was filmed by a bystander, showed Martel dragging the victim, Safiya Satchell, 33, out of her car and forcing her down on a grass verge by the roadside. In the video clip, it shows Martel stunned the Black woman twice with a Taser, while another officer held Satchell’s arm as she struggled to free herself. She was four months pregnant at the time and later had a miscarriage.

The Miami gardens cop dragged Safiya Satchell out of her car, knelt on her neck and began using a taser on her.
She was pregnant and lost the child.

The cop got the sack.
The violence continues.#AbolishThePolice

(Major CW on that video) pic.twitter.com/AhotoAoHKw

Martel has also been charged with official misconduct after he allegedly filed two reports on Satchell’s arrest containing falsehoods. The former officer also has two complaints pending against him in the police department’s division of internal affairs.

Stachell’s attorney, Jonathan Jordan, said in a statement, “It is long overdue for civilian oversight of our cities’ police departments to ensure our officers are not just serving but protecting our community. If you’re an officer that has broken policy or acted under color of law with a belief that Black Lives don’t Matter, you ought to be looking over your shoulder because the chickens have finally come home to roost.”

“As a result of Martel’s actions, Ms. Satchel suffered abrasions to her stomach from the Tasers, bruises, and abrasions on her arms, and bruises on her legs,” Miami-Dade State Attorney Katherine Fernández Rundle said on Thursday afternoon. “By filing these criminal charges today against former Miami Gardens officer Jordy Yanes Martel, we are saying that these actions are just plain wrong.”

“I’m here to affirm the chief’s decision to terminate him, because the operative word is ‘former’ Miami Gardens police officer,” Mayor Oliver Gilbert said at a Thursday press conference reported NBC 6 South Florida. “And to let everybody know that some things just aren’t gonna be acceptable.”