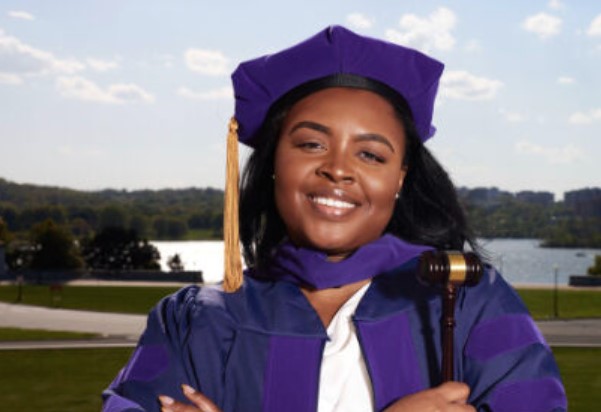 After getting expelled from high school at 15-years-old, Alexis Hawkins defied all odds and graduated from Howard Law School last month.

The 28-year-old is now gearing up for the bar exam. She’s on a mission to address systematic racism and help other Black girls find their path in life.

“Although my accomplishments are rare for where I came from, I will work to make sure that is not the case for long,” Hawkins told The Washington Post. “I want girls like me to have even more opportunities than I had, even more support, and I will always be reaching back, giving back and pulling them forward.”

Hawkins Gets Expelled From High School

2008 was a life-changing year for Hawkins.

A fight with a group of girls from different neighborhoods led to her expulsion from high school. She was attending Ballou High School in Southeast Washington, D.C. at the time. Although she was an A student, Hawkins was living in a violent area, Congress Park, that instilled in her a warrior’s mentality. If there was a fight in her community, she had to step up and jump in to protect her neighborhood.

“We band together for protection,” Hawkins explained to The Washington Post. “We fight out of loyalty and friendship, right or wrong. The result is just more trauma that goes unaddressed…It saddens me because…some of my friends have been the victims of homicide. A lot of us are living in poverty and come from homes that are not always supportive.”

Hawkins unstable home life led her to the foster care system. Her neighborhood friends became her family, allowing her to form bonds that led to plenty of fights. Without a strong support system, Hawkins found herself out of school for six months. But an experience with the anti-violence group, Peaceaholics, put her back on track and gave her life new meaning.

During the trip Hawkins met Annie Lee Cooper. An activist in the South, Cooper shared her experiences during the civil rights era. She recalled the unfair treatment she received while waiting to register to vote in 1965. A Dallas County Sheriff prodded her in the neck with a billy club and commanded her to leave the premises. Coopers retaliated against the Sheriff’s harassment, punching him in the face and causing him to fall to the ground.

“That touched me because I’m a fighter,” Hawkins said. “I have a warrior spirit, too. Annie Cooper made me realize that I was fighting the wrong people. I was fighting people who looked like me, Black girls who came from the same community, who had gone through the same hardships. She made me understand that I should be using my mind, my energy to fight racism and dismantle systems of oppression that create underserved neighborhoods and school-to-prison pipelines.”

Eventually, Hawkins earned her GED from Woodland Job Corps Center in Maryland. Then, she pursued a criminal justice degree at Benedict College in Columbia, South Carolina. Determined to make a difference, she enrolled in Howard Law School. Instead of fighting other girls in her community, Hawkins wanted to become a lawyer to advocate for Black girls around the world.

According to the American Bar Association, only 5% of all lawyers in the country are Black.

Hawkins wants to use her voice and experience to change that. As a former child in the foster care system, she wants to reach out to other Black girls who come from an unstable home life. Hawkins credits her educational success to her supporters so it’s important to her that she lifts up the next generation of leaders.

“Howard law students train here for the nurturing, cultural experience and because they want to be of service to their community,” said President Wayne A. I. Frederick in a statement. “However, expenses can be a barrier to pursuing critical careers in industries like public service. This gift will alleviate the financial burden for our future servant leaders who want to pursue passion over profit.”

Hawkins has been sharing her story to inspire other people to pursue their goals no matter what obstacles may come their way. Last month, she posted an encouraging message on LinkedIn to individuals who may be counted out in society.

“On May 7, 2021, I graduated from Howard University School of Law. This accomplishment represents so many things but most importantly it is proof that ANY thing is possible. This one is for those individuals and communities that are often overlooked and forgotten about by society. To everyone who believed in me, thank you!”