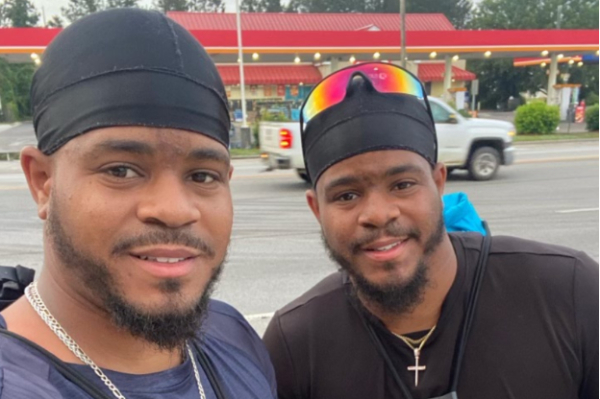 Davon and Tavon Woods, 26, were born into the foster care system. Now as adults, the twin brothers took part in National Foster Care Month by tackling a grueling 176-mile walk to show current foster children that someone is willing to go the extra mile for them.

The Woods twins trekked from Statesboro, Georgia, to Jacksonville, Florida, with police following behind them in support of their journey, First Coast News reported.

“We really want the kids to be able to see that someone is willing to walk that extra mile because being born in the system, you feel like nobody is fighting for you,” Davon said.

“Also showing endurance,” said Tavon. “How we endure life and being adopted and foster care. This walk is based off endurance. No matter how tough the journey gets, we are going to make it to our destination.”

Driving north on US 301 this week? Keep an eye out for these brothers! Davon & Tavon Woods were born into foster care. They are walking 176 miles from Statesboro, GA to #Jacksonville, FL to raise awareness during Nat'l #FosterCareAwarenessMonth. More on #GMJ! pic.twitter.com/W81IfBXnMM

The twins ended up getting adopted by the time they were 2. Now as adults, the Davon and Tavon aim to raise awareness of the scarring foster care system.

“A lot of people think that once you get adopted they think that everything is all good,” Davon said.

“9 times out of 10 its kind of worse because there are no case workers involved anymore. Growing up we didn’t know what love was.”

With 407,000 children in the American foster care system, as noted by Childcare Welfare, the Woods twins are stressing the importance of pouring into the children and showing them that they’re loved and not forgotten.

“A child in the system, all they want to do is be loved,” Davon said. “They want someone to show that affection, that support. We was missing out on that.”

The twins chose Jacksonville in memory of James Reese, the 4-year-old boy who died while under the care of his foster family. The Woods brothers say they are in contact with the boy’s biological mother and have been offering their support.