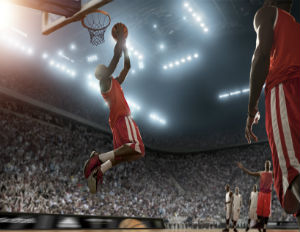 The following was written by Tai Chunn:

Former NBA All-Star Steve Francis and a host of other ex-NBA vets get the chance to suit up once again as members of the Champions League, a professional summer circuit comprising 16 teams around the country. The league kicked off last month with a charity game at Saint Louis University. Francis agreed to play for the Houston team. He is approaching the summer league the same way he approached the NBA. As he sees it, “You want to win, you don’t want to go out there and be a sideshow.â€

WhenÂ asked who is Steve Francis, his reply these days is, “son of God, dad, husband, philanthropist, and entrepreneur.â€ Francis was the second overall pick in the 1999 NBA draft and played for the Houston Rockets, Orlando Magic, and New York Knicks and the Beijing Ducks for the Chinese Basketball Association. He was known for his crossover dribble, driving ability, and flashy dunks.

The new league is expected to charge around $25 for tickets, making the players available to meet fans before and after games. Players and coaches are expected to earn between $3,000 and $5,000 a game, with a $50,000 bonus for a division title and $100,000 bonus for a league championship.

In his last two seasons, Francis reportedly earned more than $30 million as a free agent before returning to the Houston Rockets in 2008-09 season and retiring.

In retirement, he started the Steve Francis Foundation in memory of his mother who was big on education. The foundation has sent hundreds of youth to collegeÂ in the U.S. and abroad. Its mission is to create educational and recreational opportunities for at-risk youth. To pay it forward, the foundation also offers basketball clinics year round in the Houston and DC areas. Over the years, the foundation has supported more than 40 charitable organizations in both Maryland and Texas.

There’s also the Brenda Wilson Scholarship program in honor of Francis’ mother who died of cancer in 1995. Over the past five years, the program has provided more than 25, $10,000 scholarships to graduating seniors.

“I getÂ fulfillment looking throughÂ the eyes of young peopleÂ and realizing their dreams areÂ no different from whatÂ mine wereÂ when IÂ was that age,â€ says Francis.Â “So, IÂ put all of my energy into making sure IÂ do my best to assist in makingÂ their dreams come true. Whether it be giving toys out during Christmas in various cities, paying for scholarships, or making sure families get turkeys and food for Thanksgiving dinners.â€

He’s established Steve Francis Global as his brand representing all the things the he loves and wants to achieve outside of his charitable work. “Through Steve Francis Global you can expect music from my Mazerati Record Label with top indie artists in the game today,â€ he adds. “I’m coming out with an eyewear line, a full accessories line,Â men and women apparel. One of the other major things we wish to accomplish in the next years is developing water purification systems in undeveloped countries.â€