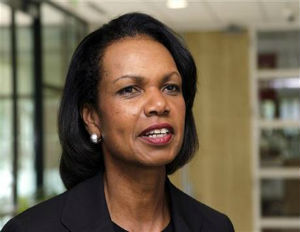 Rice was the first African-American womanÂ  to serve as secretary of state, assuming the office during President George W. Bush’s second term. She was Bush’s national security adviser during his first term and worked on the National Security Council under his father, President George H.W. Bush.

“Rice will use her insight and vast experience to explore issues facing America at home and abroad,” CBS News Chairman Jeff Fager and president David Rhodes said in a statement on Sunday.