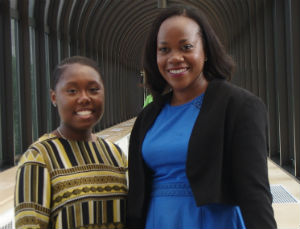 This is a remarkable story about how homelessness led to a mentoring relationship between a scientist and innovator and a young bioengineering major. Moriah Wiggins, a rising junior at the University of Massachusetts, Dartmouth, once resided at Brookview House in Boston, a nonprofit that provides emergency housing to homeless women and their children. When she was 6, Wiggins lived there with her mother for a short time.

But Wiggins attributes her success to the life-changing supports at Brookview, where she is remembered as a “very shy, introverted, and studious little girl who wanted to be a designer when she grew up,â€ recalls Deborah Hughes, Brookview’s president and CEO. Through Hughes, Wiggins was connected to a mentor who works in bioengineering.

Brookview’s programs aim at breaking the cycle of homelessness and poverty by providing practical training and support to its residents.

“The majority of homeless families in the U.S. are headed by women,â€ Hughes says. Brookview provides “education and training, workforce development, and behavioral health programs that address the trauma of homelessness and domestic violence.â€

The nonprofit also provides “a full set of services for children ages 6—19,â€ Hughes says. “We have youth development programs, after-school, a full-day program in the summer, and an outdoor adventure program.â€

It was the rich programming at Brookview that inspired Wiggins’s continued participation long after she and her mother moved into permanent housing.

“I was very involved,â€ Wiggins says. “Until about age 13, I was in the after-school and summer programs. They gave out awards for being the best in math. It was a little bit of a competitive atmosphere that made you want to be the best,â€ Wiggins says.

While attending the Massachusetts Conference for Women to receive its 2014 Be the Change Award, Hughes met scientist, innovator, and mentoring devotee Jeri’Ann Hiller, Ph.D., who was speaking at the conference.

“Deborah met me and connected my passion for mentoring with my achievements as a scientist,â€ says Hiller. “She thought I’d be a great mentor for Moriah.â€

Hiller earned both a B.S. and Ph.D. from the Massachusetts Institute of Technology. She’s been at Boston Scientific for 10 years, where she now manages a team of scientists in medical device development.

But Hiller sees her day job as only one way that she’s accomplishing her goal of helping to improve people’s lives. The other is by mentoring.

“Having a real-life example of someone who is doing what you’re dreaming of and modeling the qualities you’re trying to develop,â€ Hiller says, “I’ve found to be powerful in advancing along my own path.â€

Hiller hopes the mentoring relationship with Wiggins–which is fleshed out in monthly phone calls, in-person meetings, and e-mails–will help the young woman tap into her potential. “I hope it will help her find the unique way that she can bring her creative contribution to science and engineering.â€

Hiller sees the relationship evolving as Wiggins’s needs change. “I’m thinking about future internships and ways she can shadow me at work in the coming year.â€

In addition to mentoring Wiggins, Hiller mentors two protÃ©gÃ©s at Boston Scientific and enjoys having a mentor herself. She says each of us has the potential to mentor.

“It comes down to investing the time to understand what you’ve learned and how you’ve succeeded, and extracting the wisdom from your challenges and from what you’ve accomplished–and then being intentional about sharing it.â€