Fortune Editors on Why One Black Woman Made Most Powerful List 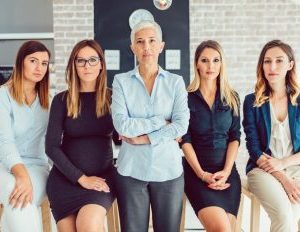 Group of young business women with their female mentor and leader posing for group portrait in their office. Looking at camera. Serious and confident face expressions.

Last week, Fortune released its 20th annual Most Powerful Women list of 2017, spotlighting 51 women who have made tremendous strides as leaders in some of the top companies in the world. Included in the list are 26 CEOs who control more than $1 trillion in market capitalization, nine women in tech, and PG&E CEO Geisha J. Williams, the first Latina CEO to run a Fortune 500 company and to make the list. General Motors CEO Mary Barra topped the list for the third straight year, while 41-year-old actress and entrepreneur Reese Witherspoon was the youngest person to be listed.

Ann Marie Campbell, who climbed the corporate ladder at The Home Depot from cashier to executive vice president of U.S. Stores, was also included. Campbell, however, is the only African American woman named on this year’s list.

When asked to specify the criteria for those selected, Fortune confirmed that their methodology was based on “the size and importance of the woman’s business in the global economy, the health and direction of the business, the arc of the woman’s career (résumé and runway ahead), and social and cultural influence.” The magazine also notes that they named Bozoma “Boz” Saint John and newly appointed Starbucks COO Rosalind “Roz” Brewer as part of their 10 powerful women to-watch list. Nevertheless, we questioned why the scores of women who were named as Black Enterprise’s Most Powerful Women in Corporate America 2017 were excluded from the list. Based on the criteria, it’s hard to fathom why bosses like Shonda Rhimes; Cheryl Boone Isaacs, the President of the Academy of Motion Picture Arts and Sciences; Tracey T. Travis, the EVP & CFO of The Estée Lauder Cos. Inc.; and Kathy N. Waller, EVP & CFO, The Coca-Cola Co. were not included. It’s also hard to believe that they simply aren’t on the radar of a prominent business magazine.

Nonetheless, we did some digging and reached out to Fortune’s Ellen McGirt and Kristen Bellstrom. They explained that all women listed must have an operational role in a large-scale company. “We have a couple of CFO’s who have outside influence in their companies, but otherwise we really just consider women who are in operating positions.” That is why women like Denise Young-Smith, the VP of Worldwide Human Resources at Apple Inc., didn’t make the list, she said. She added that Channing Dungey, who was appointed last year as president of ABC Entertainment, was also in the running. However, she was not selected because “her business was not quite large enough. We don’t have a lot of women in entertainment and it tends to be because the businesses that they control aren’t as large as some of these Fortune 500 companies,” Bellstrom explained.

According to McGirt, the lack of black women on “these lists reflect bigger systemic barriers that continue to exist” that have historically and continuously blocked African American women from advancing in corporate America. “Our list is a reflection of corporate America,” said Bellstrom, and this “is what corporate America looks like.”

“I spent the last couple of months spending time with people like Roz Brewer and Ursula Burns and really interesting women, many of whom are not in operational roles, and we talked about why that is and how that happened,” said McGirt, adding that these barriers “have prevented all women of color—but particularly black women for this specific story—from getting into these powerful operational roles.”

Beth Kowitt, who also helped edit the list, told BE that because Ursula Burns’ stepped down earlier this year as the CEO of Xerox, she has left a gaping hole in corporate America and on their list. Now, there are no more African American female CEOs running Fortune 500 companies. “We feel her absence from the list,” said Kowitt. “Having women of color on the list is obviously incredibly important and it’s hard for us to see that number be so small.”

Despite the fact that women of color are leaning in, the integration of racism and sexism has made it harder for women of color to climb the ranks of corporate America and receive deserved recognition. Hence, it’s vital to offset this issue by celebrating black female business leaders who demonstrate resilience in breaking barriers that help pave the way for younger black women to succeed. Here’s the full list of our 50 Most Powerful Women.