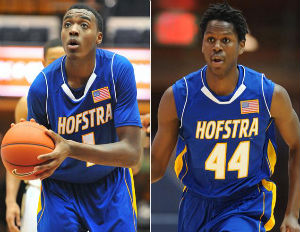 Four Hofstra University men’s basketball players were arraigned on Friday after being charged with a string of thefts from school dorm rooms, according to the N. Y. Daily News.

All four suspects made statements to police indicating some involvement in the charged crimes. Hofstra spokesman Stephen Gorchov said that after the players were arrested they were immediately suspended from the team and banned from the dormitories.