Four Women of Color are making Military History as Commanders of U.S. Warships 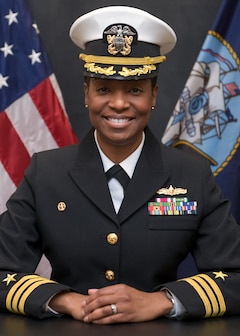 Cmdr. LaDonna Simpsonj is a graduate of the U.S. Naval Academy. She is one of four women of color who are making Naval history. Photo credit- United States Navy

According to The Naval History and Heritage Command, the first women to serve in the U.S. Navy were nurses. In recent times, more women have been making remarkable strides in a typically male-dominated profession. NBC News’s Lester Holt reported that four women of color are making first-time Naval history by commanding warships at the same time. Their service has been marked by breaking barriers and also opening doors for future military leaders who may want to follow in their footsteps.

In the interview, Jones said that she is honored and privileged to serve with the other women. Hall noted other things that the women have in common.

All of the servicewomen who are answering the call to serve in the Navy are mothers, too. “We have managed to make our family work with the career that we have in the Navy, and we’ve all been successful at doing that,” Hall said when Holt interviewed her virtually.

“If it were not for, one, being married, for over 18 years, I would not know how to operate in a male-dominated profession. As a mother, it definitely taught me patience and time management,” Wijnaldum told Holt.

The commanders are nuclear qualified. Holt explained that the trailblazers possess STEM backgrounds– Science, Technology, Engineering and Math. In the interview, Holt said that the women hope to inspire others coming up the ranks.

People reported that the women are all based at the Norfolk Naval Station, located in Norfolk, Virginia.