Why Fastsigns franchise has potential 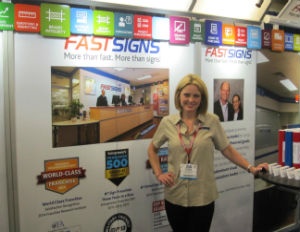 The 23rd Annual International Franchise Expo wraps June 21st at New York’s Jacob K. Javits Center. The event is being called the “biggest franchise expo in the world”. This expo showcased more than 400 franchise concepts and hosted more than 20,000 attendees from 50 states and 80 plus countries.

Blackenterprise.com is putting the spotlight on franchise opportunities showcased at the expo that may have potential.

Fastsigns participated in the expo to meet with potential franchise partners and discuss the company’s “More than fast, More than signs” objective. The company continues its mission to position itself as an industry leader. Now present in eight countries and counting, the company uses signs, graphics and visual communications centers to provide solutions to consumer challenges, tell consumer’s stories and increase their visibility.

Here’s are six reasons why he believes their franchise concept has potential.

“We are experiencing our third year of record growth. People are recognizing that. We have the highest rated franchise satisfaction and we are here at the show introducing our model to new candidates”.

“We are very transparent in our sales process. And we really showcase the success of our existing franchisees. Anybody looking for a franchise today should be asking for Item 19, for transparency to see the financial opportunity, we present that. In addition to that we use two third parties that rank our franchise satisfaction”.

BE FYI: The most important information for the prospective buyer is Item 19 in the Franchise Disclosure Document. According to entrepreneur.com, “only 30 — 40 percent of franchisors provide information on how much their current franchisees are earning; the others must state that they choose not to make such a claim.â€