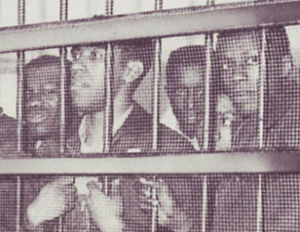 Fifty-four years ago in Rock Hill, S.C., a group of nine students were sent to jail for nonviolently protesting during the Civil Rights Movement. At the time, the students were teens and life-long best friends, who were attending Rock Hill’s Friendship College. During the height of the Civil Rights movement in 1961, they spent months preparing to partake in the struggle for freedom and take action.

Clarence Graham, one of the eight members of the ‘Friendship 9’ opened up about that fateful day stating, “We just got tired of being second-class citizens. We were often kicked, spit on, cursed out. This was carefully orchestrated. No, no this was planned to the T. We had to because our lives were at stake.”

[RELATED: THESE MEN SPENT 27 YEARS IN JAIL FOR A CRIME THEY DID NOT COMMIT]

According to reports, the nephew of the judge who convicted them in 1961 will be the judge to clear their names, give them back their dignity, and validate their well deserved innocence.

The “sit-ins occurred in North Carolina at a Woolworth counter to bring awareness and attention to social justice and discrimination issues in the South. The Friendship 9 developed a peaceful strategy, where they would quietly sit down at a whites’ only lunch counter at McCrory’s.

Making the decision that day to sit down at McCrory’s was bold and inspirational. The teens were hungry for freedom, change and equality. Graham recalls not even being able to sit down, after immediately being dragged out and taken to the jailhouse where they were arrested for trespassing. Upon arrest, the group decided to accept the option of “jail, no bail,â€ due to steep fine fees, and were sentenced to hard time. They spent a total 30 days in prison, but the conviction and stigma attached to their names remained for the 54 years following.

Another activist from the group, David Williamson Jr., said in reports, “It was like dragging a chain behind you. You always had it back there in the memory, and any time you would fill out an application you always had to tell them and you wondered if it would affect if you got a position or not.â€

In 2011, Rock Hill native Kimberly Johnson approached the town’s Solicitor Kevin Brackett, who is presenting the case to the courts. Brackett argues their conviction will never stand and insists that clearly the Friendship 9 were only convicted because of the color of their skin. They were not responsible for breaking any laws, and remain proud to be involved in the fight that eventually led to segregation and ultimately freedom and racial equality.