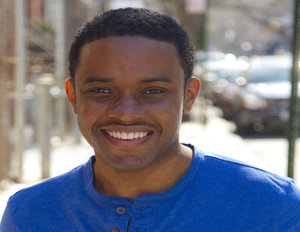 Influencer, author, life coach, and model Pervis Taylor, III is out to change the world one principle at a time. Whether through his books, tweets, coaching sessions, or morning pick-me-ups, Pervis always looks to offer a message of inspiration, hope, and purpose.

Originally from Lancaster Texas, Pervis gained a keen interest in the music industry as a teen.

“I got Mary J. Blige’s “My Lifeâ€ CD at 15 and it changed my life,â€ Taylor admitted. “From then on, I knew I wanted to work in entertainment.â€

Pervis pursued his dreams diligently and gained a scholarship to attend the University of Miami as a Marketing major and Music Business minor. Throughout his college years, he had one goal in mind: to be Diddy (better known then as Puffy). As a young co-ed, Taylor networked like a pro and secured an internship at Elektra Records where he met many industry executives he remains in touch with today. An MTV producer caught wind of his hyperbolic progress and made a half-hour segment chronicling his experience.

When he got back to school, one day, Taylor’s mother told him she heard that Lyor Cohen, CEO of Island/Def Jam at the time, went to the University of Miami. Pervis immediately went to the school of business to confirm. His mom was right. Taylor reached out to Cohen with persistence and when they finally connected, Cohen was impressed. Taylor’s relationship with Cohen not only led him to landing a job at Def Jam shortly after graduation, but also opened the relationship between Lyor Cohen and University of Miami that students are still benefiting from today. Cohen has been providing large sums of financial support for the school ever since.

While spending time on the New York grind, working at a music publishing company during the day and working at Def Jam at night before working there full time,Taylor was influential in the marketing and branding of artists such as DMX, Ashanti, Ludacris, Jay-Z, and Kanye West. After spending two years at Def Jam and seeing P. Diddy “flip the scriptsâ€ to play in Monster’s Ball, he decided to test his acting and modeling skills to keep going along the same path. Taylor went on one audition with Wilhemina Models, and was signed on the spot to do film, commercials and print work.

Unfortunately, one week after being signed as a model, Pervis got the call that his father died suddenly. Devastated, Taylor’s dad’s death took a toll on his attitude. Though he did not have much time to speak with him, Pervis remembered, “one of my father’s last words to me was that I was going to write a book and help young people, especially young men of color.â€ At the time, Pervis could not see himself as an author. It was not until years later that the words his father spoke over him would come to fruition.

Taylor continued to work, but was distraught and often depressed by the pain of his father’s death.

“I think that’s when I started to get the inspiration to do what I am doing today,â€ Pervis explained.

While grieving over the loss of his father, Pervis never lost his faith. The hope he received when he was down, was the same that he offered to his friends, co-workers, and followers.

When Twitter started to become popular, Taylor tweeted inspirational quotes and tagged them “#PervisPrinciples.â€ Soon, executives at Def Jam that he used to work with and random people started reaching out to him. Pervis said, “People started saying, ‘Yo, what you said really blessed me,’ or ‘I really needed that.’ Then, my friend said Pervis, you should write a book. At that point I remembered what my dad said before he died and knew it was time.â€

Driven by his dad’s words, Pervis started writing. He put together his quotes, had a friend who was a graphic designer create the look, and went through Amazon’s self-publishing track to create volume one of a three part series: Pervis’ Principles.

After going through the arduous self-publishing process, Pervis’ first book was released. This changed his outlook on his career and caused him to tap into his gift of exhortation by taking on life coaching clients. While speaking on a panel about Film and Modeling, he was approached by a school teacher that wanted him to talk about the same subject. Pervis insisted on teaching them some of the principles in his new book and the teacher was sold. She bought copies for her students and had him conduct a workshop for her Senior class.

Pervis continues to speak to teenagers around the country. Once a week, Pervis life coached a group of young women in an alternatives to incarceration program for SCO in Brooklyn, New York. Pervis has seen the teens transform throughout the time he has been able to work with them and has received word from their counselors that when he is not around, they respond rather than react, articulating Pervis’ teachings in the process.

Though he speaks to young women and men, Pervis states, “I feel like I have a responsibility to help young black men. I want to be able to give a young man an opportunity to realize his vision.â€

One of Pervis’ next endeavors is to develop his scholarship fund which will give two young men partial funding over a four-year period for an advanced degree. He effused, “I want to tell someone who doesn’t think they have a chance ‘I believe in you, you can do this.’

Later this year, Pervis will be speaking at Brandon M. Frame’s “Black Male Instituteâ€ at Yale University and teaching the young men how to process their emotions.

Next, in addition to developing the scholarship fund, Pervis plans to release the print version of Pervis’ Principles, Volume II, and create a reality show featuring his life coaching experiences.

You can find Pervis’ Principles on his site at pervistaylor.com, on twitter @PervisTaylorII and at Amazon.com.