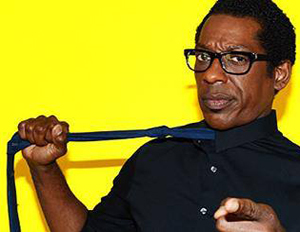 Writer, actor, comedian and activist Orlando Jones is all about taking things to the next level. Since his start back in the ‘90s writing for TV shows like A Different World, Roc, The Sinbad Show, and MadTV, Jones has managed to morph and elevate his career into a multitude of acting gigs ranging from the big screen and films like The Replacements, Evolution, Drumline and Biker Boyz to small screen gigs like his most recent role co-starring on the hit Monday night TV show Sleepy Hollow.

Always about succeeding at the Hollywood hustle, these days Jones continues to elevate things to the next level by capitalizing off his online following with his newest endeavor iROC Emoticons. Described as “the first ever socially diverse Emojis appâ€ the objective is simple: Instead of featuring standard emoticons featuring yellow faces and goofy looks, Jones’ company design emoticons to represent the many looks of people of color. “I think more than ever, critical conversations are happening around the issues of diversity and representation in media,â€ says the Mobile, Ala. native. “So with that in mind, I wanted to release emoticons that I thought invited people who are not represented in the mainstream media very often into the conversation by creating a diverse mobile message opportunity to show the diversity of voices.â€

Outside of the Hollywood glitz and glamour, Jones is a savvy intellectual aware of issues effecting the black community. And for him, proper real-life digital representation—racially—is just as important as diversity outside of the digital world. “To me, the pursuit of money is one thing,â€ he says. “But we’re trying to give voice to people who have been left out of the conversation. This thing is really about my daughter and other children like her who I don’t believe are going to look at little yellow emoji’s blowing kisses and see themselves. This is about creating an app so we can all be a part of this digital conversation and see ourselves represented authentically, not how someone else sees us.â€

With a soft launch based on constant feedback from real people ranging from black military personnel to sororities, Orlando Jones’ Iroc emoticons are currently available on Androids and Iphones.