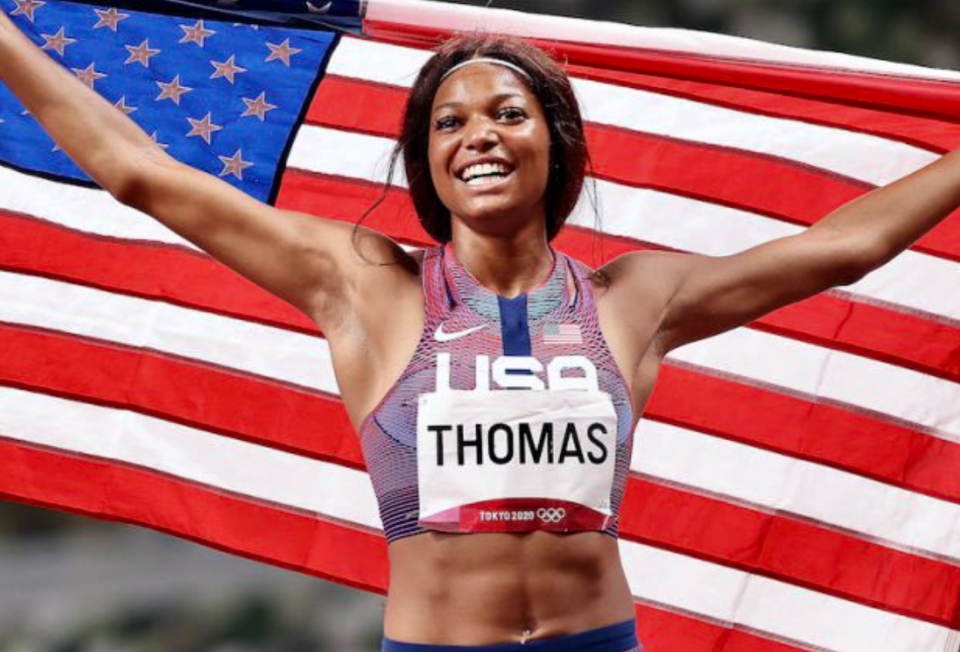 Harvard University hasn’t been known for producing Olympic medalists — until Gabby Thomas stepped on the track.

The 24-year-old track star has been making headlines as a strong medal contender ever since she won the women’s 200-meter dash at the U.S. Olympic trials in June. Now, Gabby Thomas is making history as the first Harvard graduate to win two-track medals from one Olympic Game, according to Go Crimson, the official athletics website for Harvard University.

“Leaving my first Olympic Games with two medals,” Thomas wrote on Twitter. “ I am so blessed. Blessed to have had the opportunity to represent @teamusa at the Olympics, to have my support system, to have an amazing medical staff here with us, and to have a coach who prepared me for these moments.”

I am SO blessed. Blessed to have had the opportunity to represent @teamusa at the Olympics, to have my support system, to have an amazing medical staff here with us, and to have a coach who prepared me for these moments❤️🤞🏽 pic.twitter.com/Q4UjSAOjt3

🥈🥉 – The first Harvard woman to take home two Olympic medals from one Games.

On Tuesday, Gabby Thomas earned an individual bronze medal in the women’s 200 meters. She placed third in the final, finishing behind Jamaica’s Elaine Thompson-Herah and Namibia’s Christine Mboma. Thompson-Herah, who also won gold in the Tokyo 100 meter, finished first with a time of 21.53 seconds. Mboma clocked in at 21.81. Thomas finished with a time of 21.87.

“It feels amazing because I really worked for that one. I fought tooth and nail over those last 30m. I gave it my best effort and I am really happy that effort came out with a medal,” Thomas said after the race, Women’s Running reported.

“It was a very tough three seconds at the end, not knowing if I got a medal or not but I focused on my composure. The last thing my coach told me was to stay relaxed throughout the entire race and I think that is what got me the medal.”

Thomas concluded her Olympic debut with a silver medal. She ran the anchor leg for the US 4×100 meter team, contributing to the team’s silver win in 41.45. The silver-winning US team included Javianne Oliver, Teahna Daniels, and Jenna Prandini. Jamaica’s all-star women’s team won gold 41.02 seconds.

“We were really excited to come out here and work hard together and come up with a medal,” said Thomas, Yahoo Sports reported. “We knew it was going to come. You know we manifested it, we plan for it and we’re just really excited to do this for Team USA.”

Gabby Thomas Goes From Harvard to the Tokyo Olympics

The record-breaking Florence, Massachusetts native graduated from Harvard in 2019. She received a bachelor’s degree in neurobiology and global policy.

The young track star was recruited by Harvard to compete in the 100 meter, 200 meter, triple jump, and long jump. While at Harvard, Thomas became the first women’s sprinter in Ivy League history to win the 200-mgraeter event at the NCAA championships, according to the Boston Herald. She also took home 22 conference titles in six different events.

Thomas is currently pursuing a master’s degree in epidemiology and health care management. In 2019, she earned a bachelor’s degree in neurobiology and global policy from Harvard. She was recruited by the Ivy League School to compete in the 100 meter, 200 meter, long jump, and triple jump. Thomas enjoyed a standout career at Harvard, becoming the first women’s sprinter in Ivy League history to win the 200-mgraeter event at the NCAA championships, according to the Boston Herald. She also took home 22 conference titles in six different events.

The decorated Harvard grad is now the first Harvard women’s track and field alumna to win an Olympic medal, according to Go Crimson.

From watching the Olympic Trials on television to winning two medals at this year’s Olympic Games, Thomas leaves us with some words of inspiration.

“I remember when I was a little girl watching [Olympic Trials], it just felt so far out for me,” Thomas said, NBC Sports wrote. “Do what you want. Dream big and take what is yours… If I can do it, you can do it.”

FacebookTwitterYoutube
← This Expert-Led Bundle Will Teach You How To Kickstart And Run A Successful Business ← 11 Medals for Allyson Felix as Stellar U.S. Team Take 4x400m Glory
×