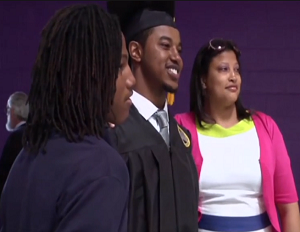 In 2010, Krishaun Branch was a part of the first class of graduating seniors all headed to college at Chicago’s Urban Prep school. Now, four years later, Branch is Urban Prep’s first alumni to graduate college, but his road to getting his degree was anything but easy.

Coming from Englewood, a dangerous South Side, Chicago neighborhood that’s home to the first Urban Prep campus, Branch dabbled in gang life as a kid and quit Urban Prep after getting into a a fight. But when a young friend of his was beaten to death, Branch got serious about his future and begged to be readmitted into the charter school.

Now, four years later, Branch’s support system including family, friends, and Urban Prep founder Tim King gathered in a Nashville church to celebrate the young Chicago native’s achievement as he walked across the stage at Fisk University to collect his degree.

“There are times in life when you think you’re right, and there are other times when you know you are,” says Urban Prep founder Tim King as he discussed how Branch’s success is proof that Urban Prep was desperately needed in the community.

Branch, who graduated with a bachelor’s in psychology, plans to go back to his old school and serve as a mentor to incoming freshman and use his story as a testament to the positive change than can occur.

“A gang banger from Chicago, from Englewood, can be a college graduate and leave that side behind,” says a teary-eyed Branch on his big day.