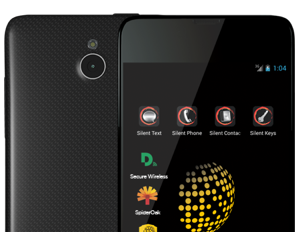 At over $600 the Blackphone is a little pricey, but comes bundled with various encryption and security services.

While the idea of making a phone “NSA-proof” is a nebulous concept, and while Spanish smartphone manufacturer Geeksphone isn’t making a go for the title, it certainly seems like it is with the Blackphone, a security-optimized smartphone running a custom version of Google’s Android operating system.

It isn’t doing this alone, however, and has paired up with the US encrypted communications firm Silent Circle and SpiderOak to provide secure channels for making phone calls, sending texts, and doing almost anything else you want, all in a speedy smartphone.

The only thing you’ll have to contend with is the price. The Blackphone is $629, the full cost of an average smartphone, but when bundled with Silent Circle and SpiderOak’s services, looks like a deal.

The phone’s got all the specs everyone is looking for in a modern smartphone: LTE, a 4.7-inch display, and Bluetooth 4.0. It also has both a front and rear-facing camera, 16GB of internal storage, and a quad-core processor.

Its secret sauce is in the “PrivatOS,” a custom version of Android. The phone is bundled with three years of encrypted calling, texting, and data storage services from Silent Circle and SpiderOak, along with anti-Wi-Fi sniffing service from Kizmet.

“Verizon and AT&T, for example, collect information about their customers’ Web-browsing and location which they ‘aggregate and anonymize’ to sell to marketers and others interested,” says Forbes. “The Blackphone would disrupt that, by, for example, allowing smartphone Web surfers to use a VPN, or virtual private network, for their browsing, which would encrypt their browsing activity so it couldn’t be used to reveal information about their interests.”

The phone’s expected to arrive in April, and buzz is already building. Dutch telecommunications company KPN has already committed to buy 500,000 Blackphones to sell across Europe, according to Silent Circle CEO Mike Janke.