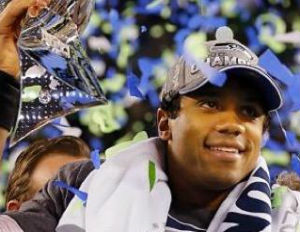 Russell Carrington Wilson is a good quarterback, but as his contract negotiations march on, it begs the question – just how good is he?? At 26 years old, he’s been in the NFL for three seasons and has been to the Super Bowl the last two consecutively. He also has more regular season wins than any other other quarterback through their first two seasons with 24 total. Gushing about his young quarterback in 2013, Seattle Seahawks coach Pete Carroll told ESPN, “he’s so special, he’s just a tremendous competitor and such a unique individual in that Â he’s able to do the kind of stuff with the names on this kind of list. And we still have games left [this season], so he’s going to keep going. There are markers this guy is going to continue to knock off.â€ The names Carroll is referring to – Dan Marino and Peyton Manning, in reference to him also throwing 50 touchdown passes in his first two seasons. As far as knocking off markers, maintaining his winning ways through the 2014 season, Wilson became the most winningest quarterback through their first three seasons tallying 36 wins in total.

His coach isn’t the only one that’s noticed how talented Wilson is, he was recognized as the NFL’s rookie of the year in 2012, as well as being selected to his first Pro Bowl game; he finished that season ranked 4th in the NFL with a 100.0 passer rating. The following year, he would again be selected to the Pro Bowl, this time with a passer rating of 101.2, and would also go on to play in his first Super Bowl – besting legendary quarterback and league MVP for the season, Peyton Manning. Despite a decline in his statistics, Wilson again led the Seahawks to the Super Bowl in 2014, where they were defeated by Tom Brady and the New England Patriots, in what has become a controversial postseason for the champions following the recent release of an investigative report into “Deflategateâ€.

Off the field, Wilson has proven just as successful in his endeavors. He’s reported to have endorsement deals from companies like American Family Insurance, Nike, Pepsi, and Microsoft just to name a few, with his earnings from those deals estimated to be between $5 and $7 million for the year, putting him right behind established star quarterbacks like Drew Brees, Tom Brady, Aaron Rodgers, and Peyton Manning.

In an interview with USA Today last fall, Wilson was asked directly about his earning potential, and he laughed, before answering, “I think for me, football comes first. If I don’t focus on football, those other things won’t come my way… I think you earn respect and earn what you’re worth by the way you present yourself, by the way that you play, by the way that you work. I’ve done the hard work.”

Finally, the guy who will tell you that he’s done it all with hard work is set to receive his first big payday. The last three years, Wilson has seen unparalleled success in the NFL, and he’s done it all for a discount (to the Seahawks anyway). Drafted in the third round, Wilson’s rookie contract reportedly paid him less than $1 million per year, before bonuses. For comparison, time tested and unequivocally great quarterback Peyton Manning, at 39 years old will earn roughly $19 million next season; as his contract currently stands, reigning Super Bowl champion, Tom Brady at 37 years old will earn $7 million this season; the current league leader in salary, quarterback Aaron Rodgers will make roughly $22 million through 2019. While it’s unlikely that Tom Brady’s contract will remain where it’s at, it’s extremely likely that Russell Wilson will also enter the 10-digit salary ranks of some of the league’s other star quarterbacks.

While the two sides continue to come to terms on what will undoubtedly be a massive deal, Wilson has been enjoying a busy offseason. He attended the White House Correspondents’ Dinner last month with his grandmother, recently showed up to the Japan state dinner with rumored girlfriend, R&B singer Ciara on his arm, and is scheduled to host the Nickelodeon Kids’ Choice Sports Awards live on July 16 from Los Angeles.

As Russell Wilson’s star continues to rise, be sure to keep an eye out for him.